The Secrets of the Oculists 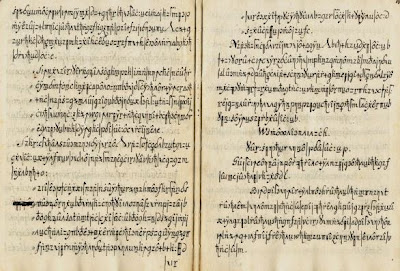 Among the oddities kept in the world's libraries are hundreds of coded manuscripts that have never been translated. Some of them are hoaxes, random scribblings put together simply to frustrate would-be code breakers. Some are exercises. But some hide real secrets.

This one, long kept at Uppsala, finally yielded to computer-aided code breaking last year. It turned out to be the history and rituals of a German society called the Oculists, who emphasized vision as a metaphor for knowledge and taught their members to "see." The code is at its heart a simple substitution cipher, but with dummy and duplicate characters to make translation more difficult, and hieroglyphic symbols for key cult ideas.

In the eighteenth and nineteenth centuries, these societies were key social and intellectual institutions in Europe. Hiding their conversations from the church and the state censor, they encouraged anti-establishment thinking and helped launched many democratic revolutions. They had their own silliness, but at least it was a silliness different from that of churches and royal courts.
Posted by John at 10:04 PM