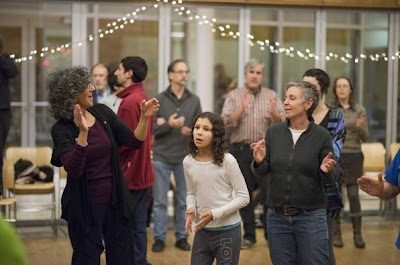 The Post has a feature today by Michelle Boorstein about atheist parenting that I found interesting. First, it starts with the picture above, captioned:


Julie Drizin, (left) her wife Ellen Kahn (right) and their daughter Jasper Drizin-Kahn, 9, join dozens of people in celebrating the Winter Solstice with music and dance at the Silver Spring Civic Building in Silver Spring on Dec. 21.

Which, I thought, pretty much sums up the Christian conservative's nightmare about atheism and gay marriage.

Boorstein goes on to say that atheist parents fall into two camps:


Many want their children to have regular rituals tied to traditional religion, like attending a house of worship, lighting Hanukkah candles or decorating Christmas trees. Some began giving thanks before meals when their children were born, directing their gratitude to the people who grew and made the food.

I have a friend like this, a regular at the Ethical Society and so on. I never felt pull in this direction myself. I think my wife would have liked to do more of this kind of thing, and she looked for some sort of non-Christian Sunday school, but given my ambivalence and the world's natural tendency toward entropy, it never happened. So we have ended up in the other camp, the non-theists who do and say nothing much about religion. We have a Christmas tree and hunt eggs at Easter, but our children know that both of these are ancient pagan rituals that long predate Christ, and have never inquired much about why we treat some days as special. If they do, I am ready with anthropological and psychological arguments.

The headline in the Post is about how atheist parents talk about death, but this section is actually very short. It consists mainly of these words from the aforementioned Julie Drizin:


“I’ve explained to them that some people believe God is waiting for them, but I don’t believe that. I believe when you die, it’s over and you live on in the memory of people you love and who love you,” she said this week. “I can’t offer them the comfort of a better place. Despite all the evils and problems in the world, this is the heaven — we’re living in the heaven and it’s the one we work to make. It’s not a paradise.” This is what facing death and suffering looks like in an atheist home.

My experience has also been that talking to children about death is very simple. None of my young children have many questions about what happens to people when they die. They seem to accept quite naturally that dead people are just gone. Nor do any of my teenagers seem to worry much about death. I think I was much more confused as a child by talk of heaven and hell than any of my children has been by our naturalist approach.

This extends to everything about religion and ethics. My children seem to be to be about normally good, and all of them have strong empathy for others. The question of why to be good, which might lead back to God, has never come up. Raised in a curious household with lots of books about science and history, they have taken naturally to evolution and a universe billions of years old. None has shown any curiosity about religion. One of my fears about parenting was that one of my children would rebel by becoming Born Again, but so far at least nothing remotely like this has happened.

My overall impression is that in our well-organized, healthy, hunger-free society, religion is an epi-phenomenon of no particularly great importance. All the worrying I did about this problem in advance was pretty much wasted, because my kids just don't seem to care.
Posted by John at 9:48 AM