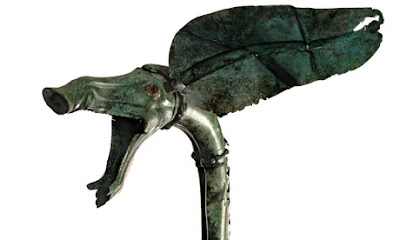 This carnyx, a Gallic battle horn, was recently excavated from the Tintignac site in France. The sound of these was suppose to unnerve enemies, but they had very little effect on Caesar's legions.

Neither did the Gallic habit of going into battle naked, which was suppose to terrify enemies with your bravery. When they were confronted by this tactic, Caesar's veterans said, "Look, they're naked. Bring up some archers." 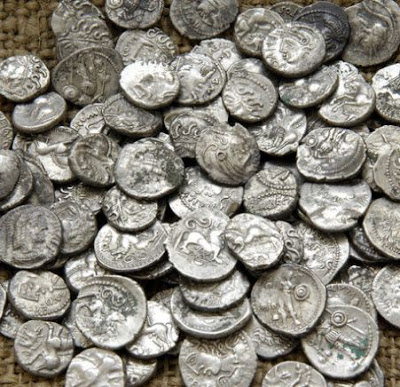 In the same vein, here are some of the 1185 Gallic silver coins found in 2010 at a site called Bassing, near Metz, occupied from 200 BCE to 800 CE. The excavators observed that the Gallic aristocrats who occupied the site did very well under Roman occupation; this treasure dates to around 20 BCE.
Posted by John at 7:10 PM