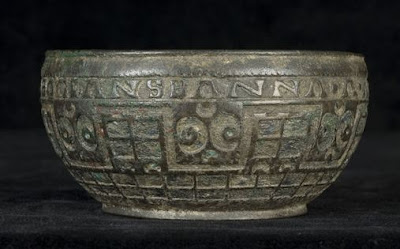 Three enameled pans found in southern Britain and Gaul may be souvenirs of visits to Hadrian's Wall:


The pans are about the size of wine glasses and are decorated with the names of forts along the western sector of Hadrian’s Wall from Bowness-on-Solway to Great Chesters. They were made in the decades following the building of Hadrian’s Wall in AD 122.


It is also fascinating that Hadrian’s Wall was a tourist attraction 2000 years ago. This highlights the significance of Hadrian’s Wall as an expression of the power and prestige of Rome, known across the Empire. Visitors continue to come from all over the world.

The ways in which the people of the Roman empire were eerily like us continue to multiply.
Posted by John at 2:35 PM