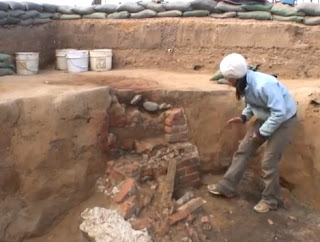 Archaeologists at Jamestown have recently explored two bread ovens in a cellar dating to the early settlement period, around 1608-1610. There are several early bread ovens at Jamestown, at least four and probably more. 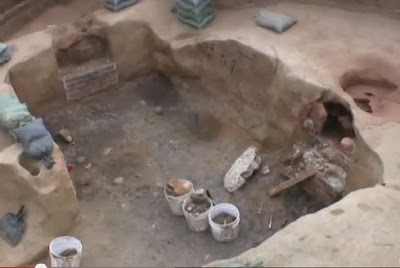 This is interesting because baking wheat bread in ovens was a part of European culture that Virginians soon lost interest in. In the German settled areas, such as central Pennsylvania and the Shenandoah Valley, European culture was carried over fairly intact to the New World, and bread ovens are quite common. But in eastern Virginia the settlers moved quickly to a hybrid English-Indian culture, with maize or "Indian corn" as the main starch and source of calories, tobacco as the main cash crop, and half-wild pigs as the main source of protein. Maize was not baked into European-style bread in ovens. Instead, it was baked in frying pans over the fire, or just fried in pork fat into a sort of mash something like modern grits. Or it was used to thicken the Indian-style dish now known as "Brunswick stew." So your average Virginia house of the 1625 to 1850 period did not have a bread oven. Poor Virginians took this trend even further and developed a lean material culture relying on very few household items, and they headed out for the frontier with little more than a frying pan, an ax, a knife, a spoon, and a gun. 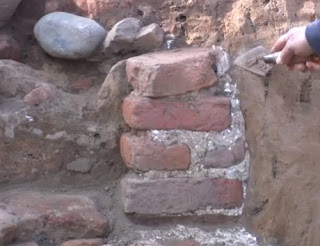 Why? Probably it was terrible ordeal of Virginia's early settlement -- the "starving time," the "massacres," the horrific death rate that approached 80 percent of all new settlers -- that led them to shed so many ancestral ways and rely instead on whatever worked in the new environment. The bread ovens at Jamestown show that the first settlers did not intend to discard old habits like eating wheat bread. It was the experience of starving and watching their neighbors die that shook them out  of European habits and made them look toward the Indians for clues as to how to survive in the New World.
Posted by John at 8:30 AM