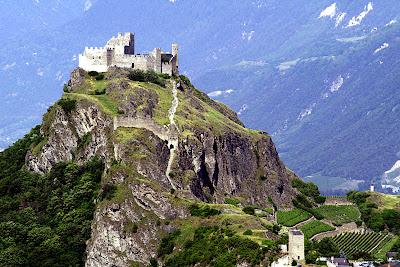 Tourbillon Castle is in the Canton of Valais in Switzerland, on a hill overlooking the town of Sion or Sitten. It was built around 1300 by Bishop Boniface de Challant. Just why the bishop needed this fortress is shown by subsequent events. 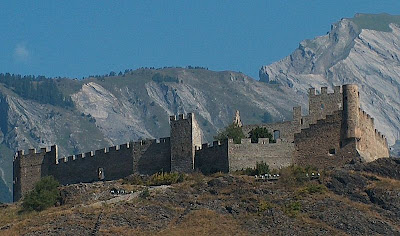 Valais is a very mountainous district, home to the Matterhorn, and it had no large cities. The biggest place was Sion. In the thirteenth century Sion became a chartered town with its own government, and it became in a few decades nearly independent. The bishops did not like this, and building the castle was part of their attempt to retain control. In the 1350s Bishop Witschard Tavel tried to reassert his power over both the townspeople and the cathedral chapter by violence. He had the support of the Count of Savoy, but the people resisted. In 1352, Sion was conquered, pillaged and plundered by an army from Savoy. (Take that, you scurvy bakers' boys!) 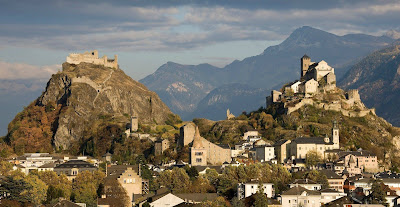 The anti-episcoal faction then formed Patriots of the Valais and launched one of those late medieval revolts in which peasants and townsmen battled their feudal overlords. This conflict dragged on for decades. In 1384, the town of Sion was sacked and burned again by the bishop's allies. In 1416 the Patriots took Tourbillon castle and burned it down. Behold the way the bishop's two fortresses, Tourbillon Castle on the left and the fortified basilica of Valere on the right, loom over the town. Imagine what a thrill it must have been for the oppressed townspeople to storm up the hill and smash in the gate. 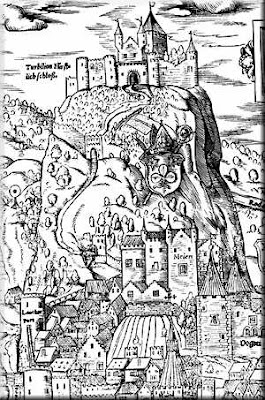 Woodcut of the castle made in 1550 by Sebastian Munster.

And another woodcut, this of an attack on the town of Sion by the bishop's forces in 1418. 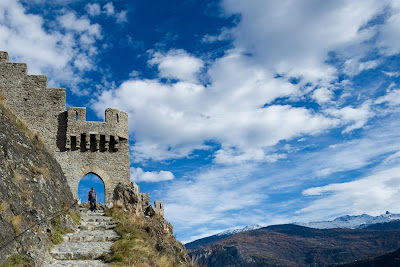 The castle was then rebuilt in about 1450 by bishop Gullaume VI of Raron --wikipedia gives 1477, but I found another source that gives this bishop's dates as 1437-1451-- who among other things added crenelation to the walls. He also updated the living quarters to the latest luxurious standard. The bishop retained a great deal of power in Valais even as the Swiss Confederacy asserted its independence from kings and emperors, and Valais remained Catholic through the Reformation.

The castle was burned down again in 1788, during another round of revolutionary agitation, and the ruins have been left to molder ever since. 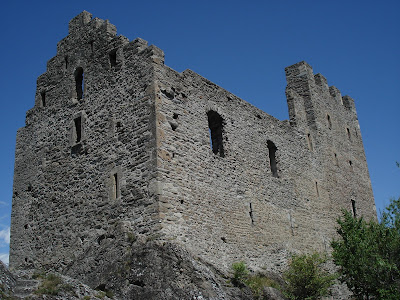 It seems to be quite difficult to take pictures of this castle, and most of what comes up in an image search is pictures taken from it toward the town below or the mountains beyond. This must be the great hall. 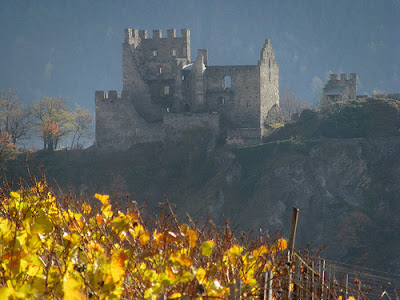 The density of history in that part of the world is startling to think about, and when you contemplate any event in European history it pays to remember how many centuries of conflict lie behind it.
Posted by John at 10:04 AM