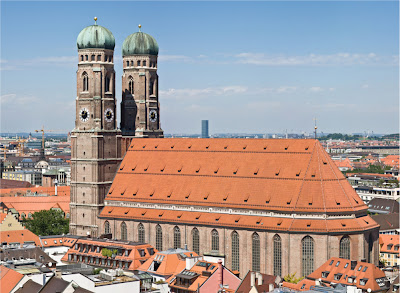 The foundation of Munich's cathedral, known as the Frauenkirche (Lady's Church), was laid in 1468. The main structure was completed within 20 years, by 1488, and towers by 1504. It is built almost entirely of brick. 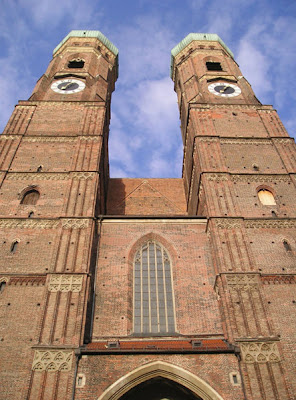 The onion domes were added in 1524. So for a medieval church it was built in a very short time, and as a result it has a strong unity of style. It was built by the Wittelsbach family, Dukes of Bavaria, to house the tombs of their house and generally serve as their family church. 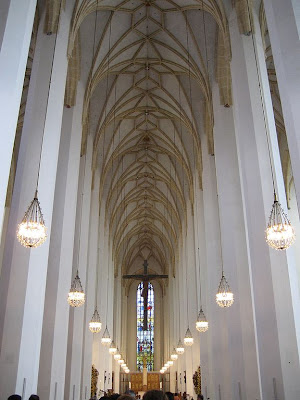 That style is much less decorated and more austere than the Gothic norm. You can especially see this in the interior, with its spare, smooth columns, free of capitals or other sculpture. The church was badly damaged during World War II, but it was restored with loving exactitude, and the main structure still looks much as it did before the war. 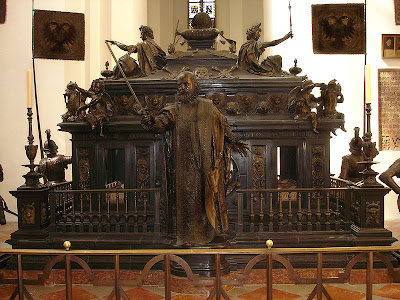 Most of its valuable art collection was removed for storage, and so also survived the bombing. This is a tomb built in the sixteenth century to house the bones Emperor Louis IV, a 14th-century Wittelsbach. 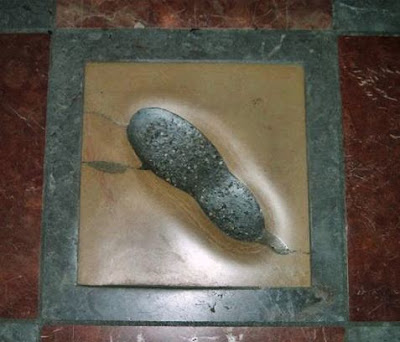 The church's most famous object is this "devil's footprint," supposed to have appeared miraculously in the floor during construction. It survived the war as well, even though most of the floor was destroyed, which only added further to its reputation -- after all, if anybody came through World War II with flying colors, it was the devil. 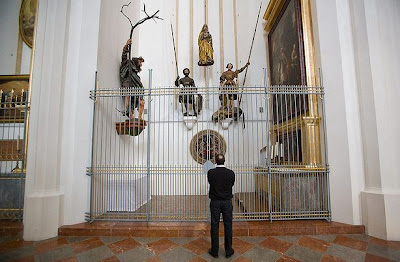 I like this church a lot, and I've even seen it. So don't try to tell me my artistic taste lacks range. Why, it extends all the way from the most decorated Gothic to this relatively spare Gothic!
Posted by John at 9:28 AM