Treasures of the Scanian War 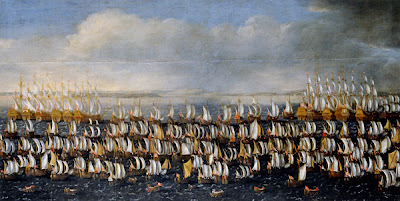 In 1676 to 1679, the kings of Sweden and Denmark fought what we now call the Scanian War. Nothing remarkable about that, I suppose; fighting wars is what kings used to do. Scania is the southernmost part of Sweden, which belonged to Denmark and then was taken by Sweden in 1658. In 1676, as both sides were involved in the Europe-wide wars surrounding Louis XIV of France -- the Swedes were enemies of Louis' enemies the Prussians, so they joined on his side, whereupon their enemies the Danes and Norwegians (then sharing a king) joined the anti-French coalition -- the Danes tried to take Scania back. That's the Danish-Dutch invasion fleet on their way to Scania above, in a contemporary painting. 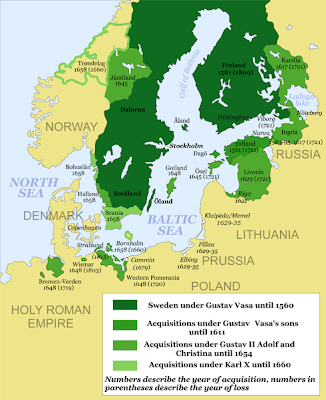 As you can see from this map, there were lots of wars around the Baltic in the whole early modern period; until 1712 the Swedes were mostly winning, but after that they mostly lost to the Russians. 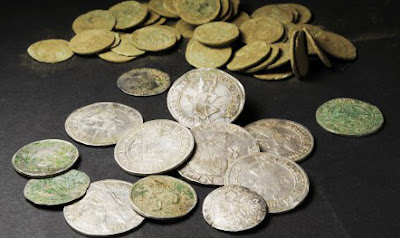 Anyway, that was all by way of background to this discovery. Swedish archaeologists have pulled more than a thousand 17th-century silver coins out of a field in Scania.


With the help of metal detectors and spades, archaeologists in Helsingborg pulled up a total of 1,150 silver coins - what they consider to be a record haul for the area. . . . “There are 70 or so such treasures that were buried in Skåne during the Scanian War. Most are not as big as this one. The usual interpretation is that it was rich farmers who buried them during the war, then died, and couldn’t dig them up again,” said archaeologist Kennet Stark, who was also on the scene.

Seventy treasures. Seventy family fortunes lost. Seventy households wrecked, scattered, and impoverished. From a war hardly anyone has heard of, that was not about much of anything in particular.
Posted by John at 12:02 PM

If the Scanian War was at all like other western European wars of that age, I suspect the kings involved, and their supporters, would have said they were defending their families' rights to the territories involved, which they would have claimed to be able to demonstrate with various more or less complex claims of inheritance and other forms of title. In other words, the war would have been fought on precisely the same ethical and legal grounds as those on which wealthy farming families based their own disputes with each other; and in the seventeenth century, I'd be surprised if success in such claims wasn't still the premier source of agricultural wealth (as opposed to, say experimenting with new methods of farming). And of course, in previous centuries not too long past the ancestors of those farming families would have counted their own private wars as among the acceptable tools of pursuing their own claims.

You are no doubt right. All are guilty, and all are punished.

I for one would not say that all are guilty. Rather I would say that peasants are not innocent because they are peasants, nor are kings guilty because they are kings. Guilt and innocence are to be sought, I think, in individual character, rather than in social status. And a good measure of guilt would lie with a person's contemporaries, if they would despise him for not seeking to make good on his claims by violence.