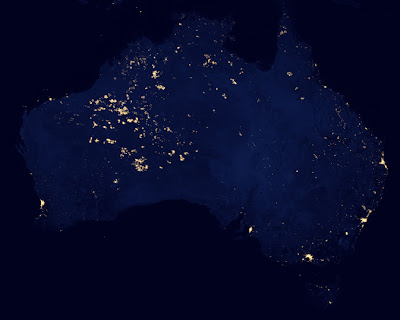 When NASA published this image from its Suomi NPP satellite, showing the Earth at night, a lot of people wondered what was going on in western Australia. There are no cities out there, nor any oil wells. Why so much light?

According to NASA, these lights are all wildfires. Theyt don't have to have been burning all at once, because the composite image was assembled over nine nights in April and 13 in October. But that's still a huge area of brushfire for a single year, let alone 22 nights.
Posted by John at 8:13 PM