The Fossil Forest of Gilboa 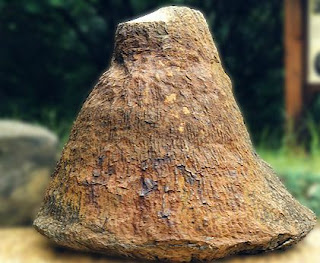 In the 1920s, workers building a dam in upstate New York started to find unusual fossils.  They turned out to be the remains of trees from one of earth's first forests, a Devonian wood that grew 385 million years ago. Above is a stump from the dominant type, Eospermatopteris. 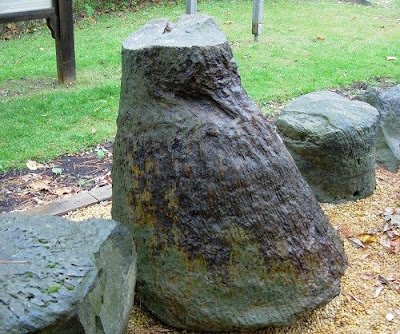 Hundreds of these sandstone casts were found on the site. 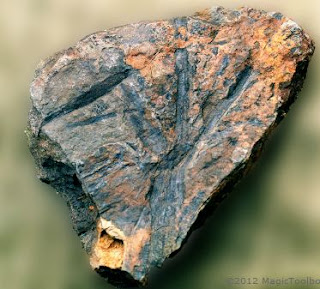 At the time, only the stumps and some stems (above) were known, so the overall form of the trees had to be guessed. 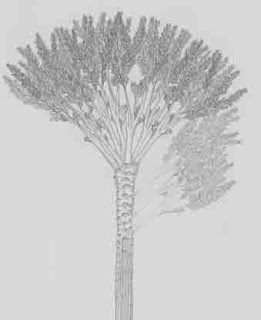 Then in 2007, scientists published fossils of an entire tree, 8 meters (25 feet) tall. It looked something like the bad sketch above. 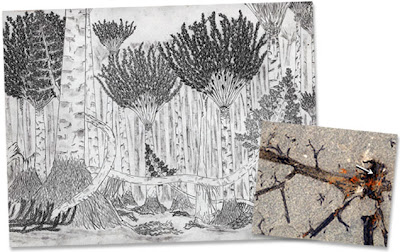 Now another group of paleobotanists, taking advantage of low water behind the dam during repairs, has published a detailed study of the root systems, and they have shown that three different types of plants grew on the site.

We have reconstructed so much about the ancient past that it is easy to miss the wonder of this. These trees grew 385 million years ago, and yet we know how close their stumps grew together, how tall they were, what their bark and branches looked like. We can recreate a forest that grew at the dawn of life on land.
Posted by John at 7:44 PM

This is awesome!!! Can't believe I'm the first to comment:( Sad that no one cares about this.