The Hobbit on Film 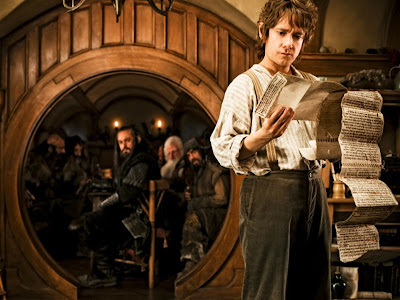 I just saw The Hobbit: an Unexpected Journey with a crowd of young people aged 7 to 20. Everybody enjoyed it, and the outing was a great success. One teenage boy said, "I don't know that it was better than The Lord of the Rings, but I had more fun watching it."

I enjoyed it myself. I loved the dwarves, especially Thorin Oakenshield, who is a really great character. The orcs, trolls, and so on are as cool as in LOTR. The scenery is amazing, the props and costumes terrific, the magic magical, the action intense. But it was just way too long. I didn't mind any of the added material -- after all, there is a lot of stuff that happens related to Dol Guldur and Mirkwood and so on that Tolkien glosses over in his published books. My complaint was that every scene was too long. Ok, Peter Jackson is great at fantastic battle scenes, but ever one in this movie could have been cut in half without losing anything, and I would have tossed the whole introductory scene featuring Frodo and the old Bilbo of LOTR.

There is a fantasy out in the film world that directors would make better, more artistic movies if they could escape from the control of money men and advertising agents. The Hobbit shows that this is not necessarily so. Given an unlimited budget and an audience so loyal he can count on us paying for three movies made from one short book, Jackson has produced a lazy, bloated movie. It would have been better if he had been forced by some sinister accountant to cut an hour or so.
Posted by John at 6:42 PM

Not surprising, given how his version of "King Kong" turned out. There were long action sequences on the island that were just an incomprehensible mess.

The cynic in me wonders if the fact that he owns the digital effects company, WETA, means he gets paid whether the scenes work or not, and gets paid more the longer they are.