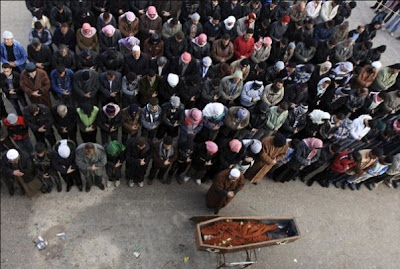 The Post has a summary today of the Syrian revolt so far, and it makes for grim reading:


Today, a year after the tentative first stirrings of what is becoming the Arab world’s bloodiest and most far-reaching revolt, whole cities are under siege. Residential neighborhoods lie in ruins. More than 8,000 people are dead, tens of thousands have been detained, untold numbers have been tortured, others are missing, and nearly a quarter-million have been displaced from their homes, according to the United Nations.

Still, there is no end in sight. President Obama said this month that Assad’s “days are numbered,” but few are prepared to take bets on what that number might be. Privately, officials in Washington and diplomats in the region acknowledge that it is far from certain that the government will fall, at least not anytime soon.

And yet the opposition, to the extent that the thinly organized and largely leaderless communities that have risen up against the government can be called an opposition, shows no sign of giving up.

I continue to be astonished at the tenacity of the Syrian rebels. True, the Syrian regime is thuggish, but was life in Syria so awful? Imagine 8,000 dead, in a country of 20 million. What makes the war worth it to those who risk dying, who have seen so many others die?

Perhaps the revolt continues because the rebels fear what will happen to them if they surrender:


“If we had known it would reach this point, we probably wouldn’t have dared,” acknowledged Bassel Fouad, 30, an activist who fled the onslaught against the opposition stronghold of Baba Amr in the city of Homs this month and is now in Lebanon. “But we did it, and now we can’t stop, because if we do, they will kill us all.”

I see only further slaughter ahead. The government will not yield, the rebels seem determined, and the U.S. will not intervene, not least because Syria's two million Christians mostly support the government and fear what will happen if the Sunni majority takes control. I cannot imagine any endgame but a slow petering out of the revolt, accompanied by yet more repression and yet more economic misery.
Posted by John at 8:41 AM