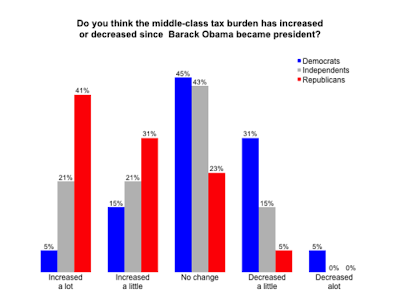 Ponder this graph, which shows that 72 percent of Republicans think taxes have gone up under Obama. (They have gone down.) Larry Bartels:


We often think of election outcomes as collective verdicts on the state of the nation under the incumbent president. As political scientist Morris Fiorina put it long ago, "In order to ascertain whether the incumbents have performed poorly or well, citizens need only calculate the changes in their own welfare." Are we better off now than we were four years ago? What happens, then, if citizens are not really up to calculating "changes in their own welfare"—if our judgments about even the most salient and straightforward aspects of our collective well-being are based more on partisan biases and media buzz than on reality?

Anger and loss feed on themselves. Republicans were angry over Obama's victory. This not only helped them retake the House in 2010, it actually changed their beliefs about the state of America. They feel that it is worse, and so they convince themselves that taxes are higher, the stock market is down, unemployment is worse, and so on. And these beliefs are all but impervious to factual refutation.