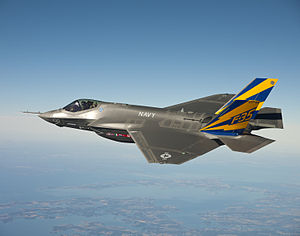 This report from Danger Room makes clear what we ought to have known five years ago: the F-35 is a bust.


The F-35 Joint Strike Fighter, the supposed backbone of the Pentagon’s future air arsenal, could need additional years of work and billions of dollars in unplanned fixes, the Air Force and the Government Accountability Office revealed on Tuesday. Congressional testimony by Air Force and Navy leaders, plus a new report by the GAO, heaped bad news on a program that was already almost a decade late, hundreds of billions of dollars over its original budget and vexed by mismanagement, safety woes and rigged test results.

At an estimated $1 trillion to develop, purchase and support through 2050, the Lockheed Martin-built F-35 was already the most expensive conventional weapons program ever even before Tuesday’s bulletins. The Air Force, Navy and Marine Corps are counting on buying as many as 2,500 F-35s to replace almost every tactical jet in their current inventories. More than a dozen foreign countries are lined up to acquire the stealthy, single-engine fighter, as well.

In its report the GAO reserved its most dire language for the JSF’s software, which agency expert Michael Sullivan said is “as complicated as anything on earth.” The new jet needs nearly 10 million lines of on-board code, compared to 5 million for the older F-22 and just 1.5 million for the Navy’s F/A-18 Super Hornet. “Software providing essential JSF capability has grown in size and complexity, and is taking longer to complete than expected,” the GAO warned.

The F-35 was conceived as a less expensive alternative to the top-of-the-line F-22, which cost around $330 million per plane. But the projected cost of the F-35 has already gone up by more than 50%, by some estimates to more than $300 million per plane. If we build fewer, it will end up costing even more. We should scrap the whole thing and replace it with a combination of more F-22s -- which we could build for around $100 million each -- and upgrades to existing planes like the F-15, the F-16, and the F-18. Enough is enough.
Posted by John at 6:20 PM