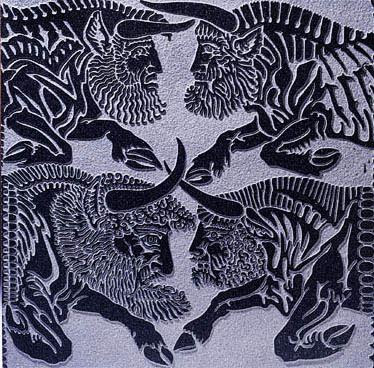 William Reimann is a sculptor who taught for many years at Harvard, and he also happens to be the father of a good friend of mine. I just discovered his remarkable web site, where you can see dozens of his works. 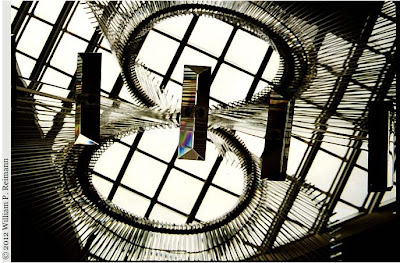 He has worked in a variety of styles, including abstract constructions of plexiglass and metal like this one. 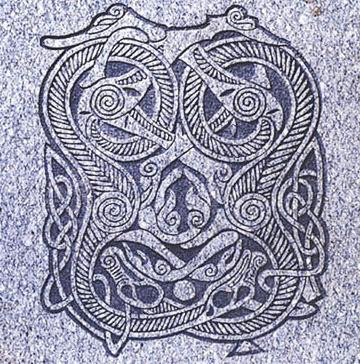 What I really like is the pieces he has done that incorporate motifs or images from cultures around the world.  One of these is the Heritage Series, which was done to celebrate immigrants to Massachusetts. The image at the top is from this work; it shows minotaur heads from Sicilian coins of the 2nd century BC. Above is an image of Irish beasts. 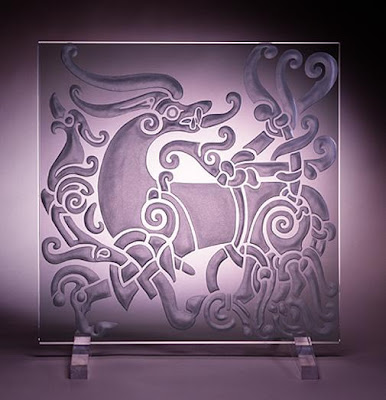 This lovely work of etched glass is based on the English stag, taken from a medieval manuscript. All the images are delightful, and collectively they are amazing.

One of the first times I met Will Reimann, he was building a stone wall. It was a traditional New England wall, made of dry-laid fieldstone, and what I remember was how much of the work he did with his eye. He would ponder the pile of stones in front of him, considering each, and then pick up one that always fit perfectly where he wanted it to go. He seemed to have an intense relationship with the stone, which he knew well enough to make it do exactly what he wanted. Something of that skill is on view in this work, a stone circle Reimann installed as part of a highway beautification project in Radnor, Pennsylvania. I understand that it was used by local druids within a few months of its completion.
Posted by John at 7:55 PM