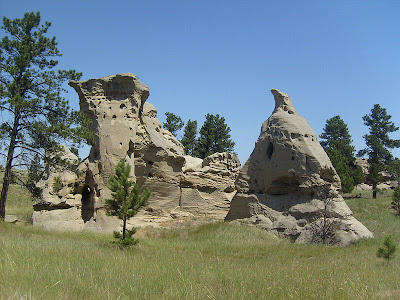 The National Park Service has announced the designation of 13 new National Historic Landmarks. One of them is Deer Medicine Rocks in Wyoming. The unusual rock formation of Deer Medicine Rocks have been a sacred site for centuries, and they are well sprinkled with petroglyphs. All the tribes of the neighborhood revere them; to the Crow, the rocks are the dwelling place of the Little People, and they used to leave offerings of food for this "race of tiny, ferocious, spiritually powerful dwarves", as wikipedia describes them. (The fascination with spiritually powerful dwarves seems to be as old as Homo sapiens, but that's a tale for another time.) 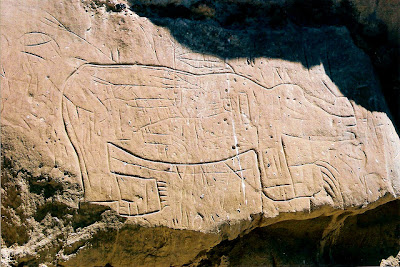 Deer Medicine Rocks gained even greater fame in 1876, when the Lakota Sioux leader Sitting Bull retreated there to fast, pray, and ponder the coming war with the United States. He had a vision in which he saw dead American soldiers falling from the sky like locusts, and he interpreted this as a prophecy of the victory at the Little Bighorn. He carved his vision onto the rock, where it could be seen for decades. 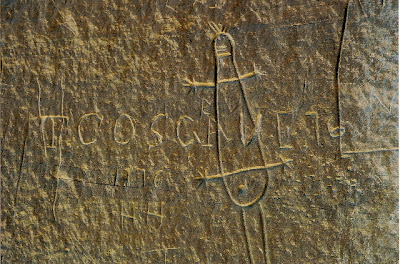 American soldiers and cowboys later added their own marks. 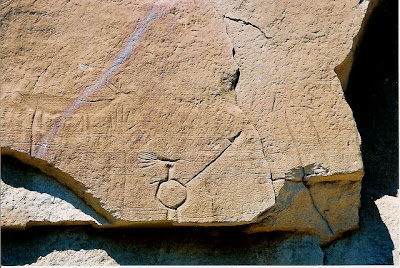 Sitting Bull's carving seems not to be visible any more, or else it is kept well hidden, since I couldn't find a picture. The rocks have been heavily vandalized, and much has been lost. One famous mark that can still be seen is this, a scar left by a lightning strike that also dislodged the fragment in the lower left-hand corner of the photo.
Posted by John at 12:54 PM