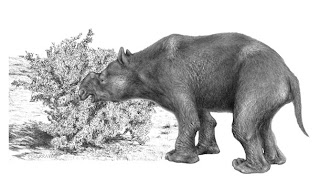 Like North America, Australia used to have many species of large animals that went extinct around the time people first arrived. (Above, Diprotodon, a hippo-sized wombat.) But that was also around the time of major changes in the climate. Did people cause the extinction, or was it just a coincidence? I always thought the coincidence argument was hogwash, and now there is new evidence that people were the cause. The evidence comes from counting the spores of Sporormiella, a fungus that grows best in the dung of large herbivores:


To settle the debate, Rule and her team travelled to Lynch’s Crater, a huge lake in north-east Australia. The team drilled into the crater and extracted two cylinders of rock, or “cores”. Each one represents fossils, soils and chemicals that have been laid down over the course of 130,000 years. They are time capsules, where millennia of Australia’s history have been crushed into solid rock.

The Sporormiella spores within the cores suggested that giant animals were common in Australia until around 41,000 years ago. At that point, the spores almost completely vanished. This gives us a very precise estimate for when these animals finally died out.

Around 100 years after this fungal vanishing act, the land also experienced more fire, as evidenced by the growing amount of charcoal in the cores. Two centuries after that, the local plants also changed.  Pollen grains, preserved in the cores, showed that rainforest plants, like flowers and conifers, started to decline. They were replaced by grasses and sclerophylls – the trademark plants of the Australian bush, such as eucalyptus.

This accurate timeline shows that Australia’s climate and plant life were stable for at least five millennia before the great beasts died out, and only started changing later. Rule’s study also shows that the megafauna were relatively unaffected by earlier climatic upheavals. Australia experienced two great periods of climate change around 120,000 and 75,000 years ago, when it became cooler and drier. Neither was accompanied by a fall in Sporormiella. The climate shifted, but the megafauna took it in their stride. Their numbers (and thus the fungi in their dung) only declined after humans arrived.