Lian Hearn, Across the Nightingale Floor 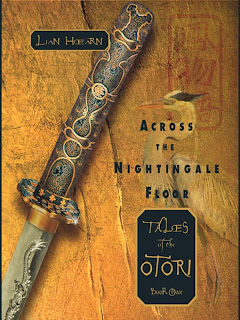 I have lately been reading Lian Hearn's Tales of the Otori as fast as I can track them down in my library. They are slightly fantastic tales set in an imaginary medieval Japan, featuring the members of a noble clan called the Otori.  So far I have read three, the first (Across the Nightingale Floor), the second (Grass for his Pillow), and the fifth (Heaven's Net is Wide), which actually comes first chronologically. Liked them all, especially the fifth.

Hearn knows a lot about Japanese culture and folklore and puts it to good use. The world of the Japanese noble clans is nicely depicted, and the magical elements (fox spirits, ninja who turn invisible)  are all drawn from Japanese folklore. The characters are ok -- sort of a cross between the characters in a modern novel and epic heroes -- and the plots excellent. I highly recommend them for anyone who needs distraction.
Posted by John at 8:27 PM