Skeletons and the Romanization of Britain 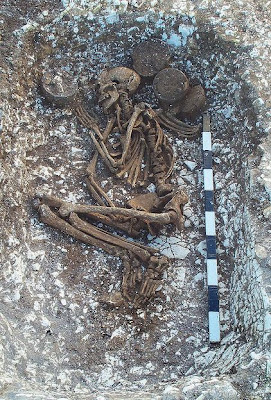 How much impact did the Roman conquest of Britain have on the lives of ordinary people? One way to ask is to look at skeletons. British archaeologists have been building up a database of skeletal remains for over a century, and there are enough now to make comparisons between the pre- and post-conquest populations. A recent study of 203 skeletons from the middle and late Iron Age and 315 from the Romano-British period found:


increased consumption of marine resources; increased prevalence of dental disease, and infectious and metabolic diseases; decreased evidence for trauma; decline in subadult growth; and average male stature did not increase.

Which is pretty much what you would expect. More fish-eating, since the Romans loved fish, less trauma, since the Romans frowned on non-professional violence, and more eating of sweets and stone-ground flour leading to worse teeth. At first, agricultural improvements may have led to better diets, but since the population grew very rapidly the mass of the people were soon eating no better than they had before, hence the lack of change in stature.
Posted by John at 10:08 AM