Heroism and the Eisenhower Monument 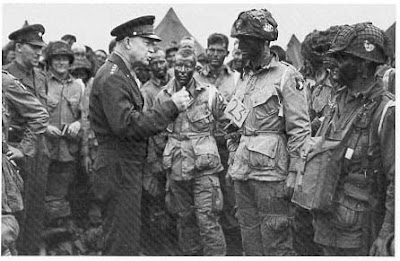 Another critic, Geoffrey Kabaservice, grouses about Frank Gehry's design for the Eisenhower Memorial:


With its 80-foot-high smokestack columns towering over a four-acre site whose only representation of its subject would be a statue showing him as a barefoot boy, the current design for the proposed Dwight D. Eisenhower memorial in Washington, D.C. manages to be both bombastic and silly. It’s easy to imagine tourists mistaking the memorial as a spectacularly misconceived tribute to Huckleberry Finn. . . .

And goes on to blame the Republican leadership for not being more involved:


And yet the leaders of the Republican Party have not uttered a peep about the plan to permanently portray the five-star general and two-term U.S. president as an impoverished child. . . . The anti-heroic bent of the proposed Eisenhower memorial, with its refusal to acknowledge that there was anything great or admirable about its subject, may well be a source of considerable satisfaction to many on the right as well as the left.

First, this is wrong; the only free-standing statue of Eisenhower in the design shows him as a boy, but there are two reliefs showing him as President and General (based on the photo above). Second, Eisenhower was not poor, he was an ordinary farm kid from a middle class family, and the statue depicts him exactly as he was dressed in a famous photograph (below). If Kabaservice thinks that makes him look "impoverished," then he knows nothing about farm life (not flashy dressers, farmers), and he is living the divorce between the American mainstream and the values of farm life that is, in a sense, the backstory to the design. 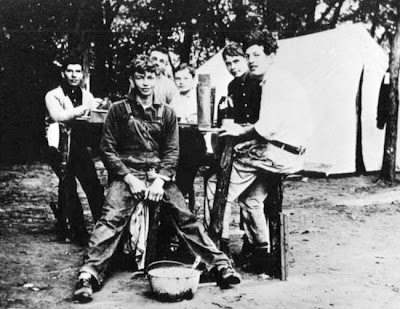 Third, why does depicting Eisenhower as a farm boy, as he himself did in his farewell address to his soldiers, imply that there was nothing great or admirable about him? Eisenhower did not think killing people was great, and as President he worked to keep the US out of war. He disliked grandstanding generals like Patton, MacArthur, and Montgomery and promoted men of less bombastic temperment whenever he could. He hated grandstanding politicians like Joseph McCarthy. His excellence as President was precisely in his avoidance of grandstanding, his reluctance to make himself the center of things, his absolute refusal to strike the kind of pose people like Kabaservice seem to want in his memorial. When asked about what made him tick, Eisenhower always evoked his early life as an ordinary farm boy. When called a hero, he said, no, I am not a hero, I just represent the thousands of uniformed men who really were heroes. Gehry's design has the virtue of taking Eisenhower at his word and portraying him as a son of the Midwestern farm country rather than as a commander in chief.

Kabaservice also complains that Gehry's design, through its radicalism, cuts against Eisenhower's love of tradition:


Gehry’s aesthetic, which seeks freedom from the dead hand of tradition, is the very antithesis of the Eisenhower ethos.

This is true, and it is what made me question the design when I first saw it. But the alternative designs conservatives have come up with have been traditional mainly in how militaristic and bombastic they are, and I say that flaw makes them unsuitable for a self-proclaimed ordinary man from Kansas.

For a successful general to refuse to embrace the glory of war, and  to deny flat out that he is a hero; for a President to insist that he is not the nation, and that he was elected to enact the will of the voters, not his own agenda; to be a great man who is remembered mainly for his quiet modesty: this was Eisenhower's heroism, and it is a kind of heroism I think we should do more to celebrate in our own time.
Posted by John at 10:54 AM

Wow, what a strange fellow you make Mr. Kabaservice out to be. One would hardly think that a person of such an alien outlook attended Yale at the same time as one Mr. John Bedell.

I recall Yale as full of people with alien outlooks.

I suppose I should add, in defense of Mr. Kabaservice, that I agree with everything he says in this essay about the contemporary Republican Party. They should, like Eisenhower, embrace moderation, seek compromise, reduce defense spending, balance the budget -- if necessary by high taxes on the rich -- and (especially) stop talking trash about their political opponents. Eisenhower refused to countenance accusations that liberal democrats were communists, and today's Republicans should stop supporting claims that Obama and his allies are some sort of terrible danger to the nation.

It is only the aesthetic theory of the essay I object to. But I suppose it is too much to expect that an American conservative could both see the dangers of contemporary Republicanism and understand art.