Neural Pathways are not so Messy 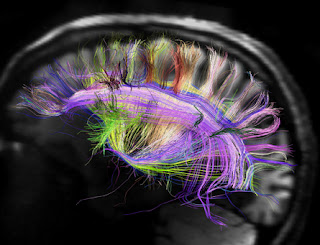 This image of the left hemisphere of the brain was made by a new technique called diffusion magnetic resonance imaging. According to its inventors, this scant detects the direction of traffic flow along white matter tracts, which are major information conduits in the brain:


The scans revealed that these brain signals form a grid, made up of parallel and perpendicular tracts woven together into curved sheets.

If this is confirmed, it is quite fascinating.
Posted by John at 5:10 PM