Reviving the Traditions of the Yurok Indians 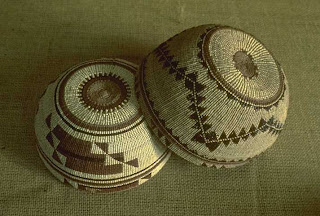 The Yurok Indians are today the largest tribe in California, with more than 5,000 members. They are culturally part of the northwest coast tradition, people who lived in permanent villages but did not practice agriculture. They depended instead on fishing, supplemented by hunting and gathering plants. The Yurok lived along the lower reaches of the Klamath River, a great salmon stream, and they inhabited dozens of villages along its banks. European disease reached the Yurok in the early 1800s, and their population fell from over 3,000 to less than half that. European settlers invaded their lands during the gold rush, and after a brief war in the 1850s the U.S. Government restricted the Yurok to a reservation. The reservation is fairly large, though, and it included most of their traditional villages, so the Yurok were never uprooted. The 1100 or so Yurok on the reservation still live where their ancestors lived, and their religion and craft traditions are strong. The language also survives, used mainly for tribal songs and chants, although it is taught in some local high schools. 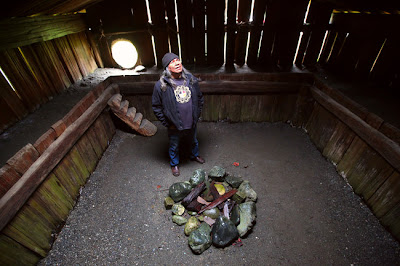 That was all background to this story, about a Yurok man whose struggles with alcohol, meth, and failure led him back to the reservation and traditional Yurok ways:

From a forested bluff, Willard Carlson Jr. stands watch over Blue Creek where its indigo eddies meet the gray-green riffles of the Klamath River. The creek is sacred to Yurok Indians like himself: it flows into high country, a pilgrimage point and a source of curative power for tribal healers. The Yurok consider it their “golden stairway” and weave its stepped pattern into their basketry.

Five years ago, Mr. Carlson was rebounding from alcohol and drug abuse when he felt the need to return here, to his family’s ancestral ground. One night, cooking salmon and eel over an alder fire, he vowed to do something that had not been tried here for at least 150 years: to build a traditional Yurok village from scratch, a ceremonial place that will “bring people home to reconnect with the old ways,” he said.

Mr. Carlson, now 59, his salt-and-pepper hair heavy on the salt, named the village now rising in a clearing Ah Pah, or “the beginning of the stairway.” He views it as a place of healing for “the many people who have lost their way.” 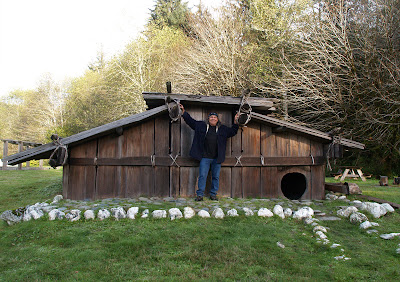 
The earth and its peoples are facing multiple threats. Indigenous people always suffer the worst during these times. The Yurok people are threatened from without by the effects of climate change, diversions of their waters, collapse of the Salmon population, unaffordable energy, land takings and misuse. They are threatened from within by drugs, alcohol, cultural disintegration.

The Yurok people once lived within a network of sustainable self-sufficient villages. Our village will find solutions to today's problems and their effects and serve as an example for others to follow through becoming self-sufficient and sustainable, cultural preservation and renewal, community building, ecological stewardship and individual renewal and healing.

According to the U.S. government, 80 percent of the people on the Yurok reservation live in poverty. Which raises  imponderable questions: are people who live in such a traditional culture really poor? If so, can they stop being poor without losing what they value about their culture? The Indians I know all have a strong practical bent, and are eager to adopt new technology that really works -- guns, outboard motors, pick-up trucks. But this requires money, which requires entering into the white man's world and encountering notions of wealth and status that put Indians on the bottom of the scale. It is hard to live half in the western world and half in some other tradition. The stresses of this halfway status explain, I think, much of the ongoing Indian crisis in America: drugs, violence, premature death. I know some Indians who find connection to their tribal traditions to be a real source of strength. Some are heavily involved in traditional life, and others just attend a ceremony or two a year while living in cities or suburbs. I used to be cynical about the alleged Indian status of Americans who didn't grow up on the reservation, and I thought they would be better off to jettison the whole business and just be American. Not any more. Now I think that life is a struggle for everyone, and we should all draw on all the resources we have to make something good of it. 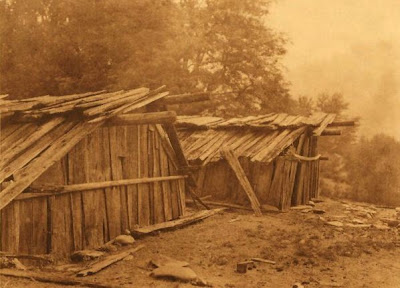 I'm so happy to see my elders trying to help better our people's . They have lost their way and are in desperate need of guidance and leadership ... We need to catch it while we still can!! Teach our culture to this generation so that even though we are grasping all these new technologies , we can use it to benefit our peoples and learn our ways, the way we are learning now . I know the importance of tradition and I will never let my heart forget either. I feel a prayer in my soul and I'm home, with my family, the river, the beating of those beautiful drums, and the beautiful songs and hollering !!! Nothing like home but its in your heart always, don't be afraid to live! Just make sure you don't forget where you came from and what's important in YOUR LIFE!!