Buried in her Bed 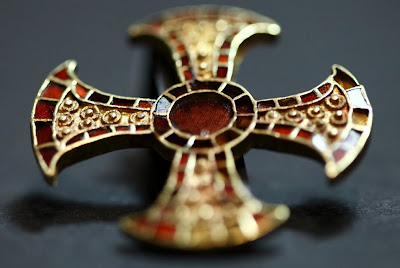 Archaeologists in England have uncovered the grave of a seventh-century Anglo-Saxon teenager who was buried in her bed. Her rich jewelry, including the cross above, a purse full of beads, and an elaborate iron-bladed knife, shows that she was of very high status.

Why a bed? Several other bed burials have been found from this period, all high status. All come from the early decades after the conversion to Christianity, and the practice is often related to the religious change. The most common Old English word for bed was bær, which also means bier, the stand where a corpse is laid to await burial; both are related to the words for lie and lay. We "lay the deceased to rest," and this is a very old formulation. Perhaps the beds were imagined as the right place to rest until the second coming, when believers would rise from the ground.
Posted by John at 12:26 PM