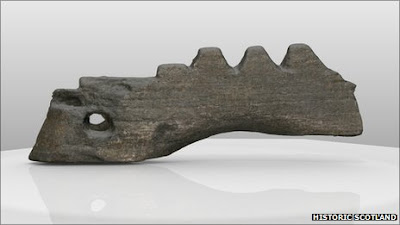 This wooden object is the bridge of a lyre. It was found in a cave on the Island of Skye in Scotland, and radiocarbon dated to around 300 BC. The discoverers are, of course, trumpeting it as a major find:


It pushes the history of complex music back more than a thousand years, into our darkest pre-history. And not only the history of music but more specifically of song and poetry, because that's what such instruments were very often used for.

Actually it does nothing of the kind, since we can trace the European tradition in both music and poetry back long before 300 BC. The Celtic languages have words for stringed instruments that are closely related to the Greek words, which means that Celts and Greeks both had stringed instruments before their languages split, some time before 1000 BC. Ancient Celtic verse is closely related in meter, structure and vocabulary to ancient verse in both Greek and Sanskrit, which takes the Celtic poetic tradition back to before 1500 BC. And that's just what we can prove; poetry and music are hard to document in the Paleolithic record, but since there are no people anywhere in the world who don't have them, they must be tens of thousands of years old. I would be willing to bet that they are as old as Homo sapiens. 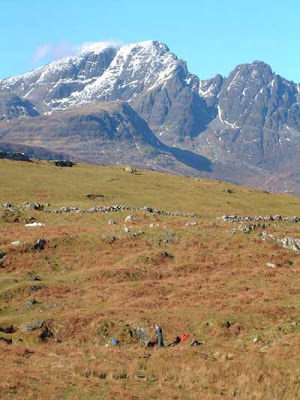 I was more interested in where this artifact was found. Iron Age people don't, as a rule, live in caves -- certainly not in miserably damp places like the Isle of Skye. Instead they use them as shelters when they are traveling, or when they are herding sheep in remote pastures. The cave where the lyre was found is called High Pasture Cave, and high pastures are likely places for shepherds to need a roof. That's the opening in the photo above. 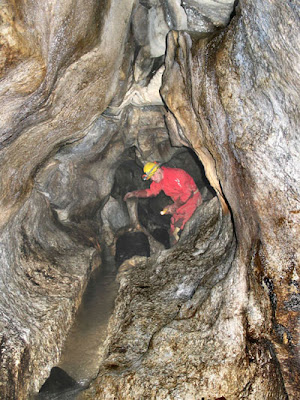 Iron Age people also performed religious rites in caves, especially those related to the mother goddess, or the gods of the underworld. The long, narrow channel of High Pasture Cave seems quite suitable for an initiation ritual, or just a spiritually charged journey to a place of meditation. 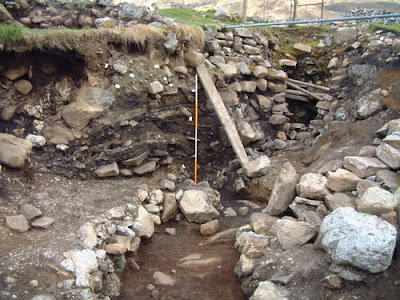 Archaeological excavations around the mouth of the cave have been carried out for some years. They show that the cave once had a different entrance, which has been blocked. That entrance was improved, probably in the Iron Age, with stone steps. Butchered animal bones suggest that there was feasting around the cave entrance, perhaps preparatory to rites within. 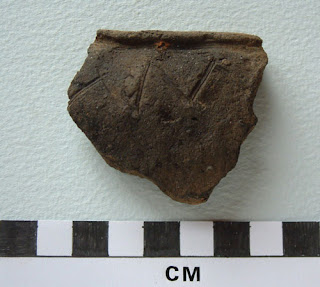 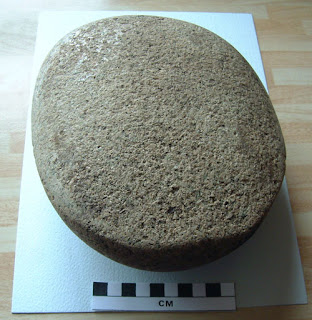 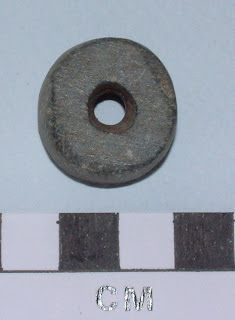 Numerous artifacts have been found in the cave, dating to the Bronze Age and Iron Age periods. Above, an Iron Age potsherd, a granite quern, and a steatite spindle whorl. 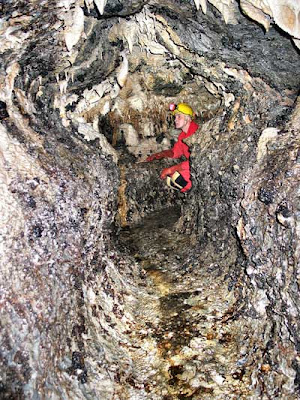 Why were people in the cave? Sometimes for ritual reasons, I feel sure. Other times they may have taken shelter in the cave in times of danger. And perhaps at other times it was used by wanderers who needed shelter from a snowstorm. Whether that lyre was used to sing hymns to the goddess, or by shepherds keeping company, or by a lone bard trapped by a storm on the road between noble seats, it evokes for me the ancient past of Britain, and the way men's lives intersect with the landscape they call home.
Posted by John at 9:30 AM