Microbes in Your Brain, or, Cats and Vampires 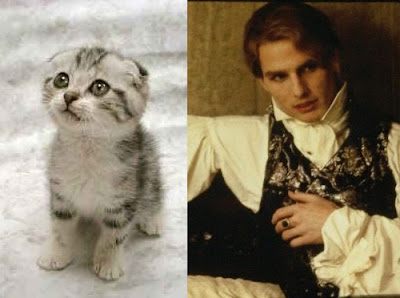 The Atlantic has a feature this month on Jaroslav Flegr, a Czech scientist who thinks our brains are being controlled by microbes. Specifically, he thinks the protozoan known as Toxoplasma gondii is rewiring our neurons. (Previous entries on Toxoplasmosis here and here.)


Since the 1920s, doctors have recognized that a woman who becomes infected during pregnancy can transmit the disease to the fetus, in some cases resulting in severe brain damage or death. T. gondii is also a major threat to people with weakened immunity: in the early days of the AIDS epidemic, before good antiretroviral drugs were developed, it was to blame for the dementia that afflicted many patients at the disease’s end stage. Healthy children and adults, however, usually experience nothing worse than brief flu-like symptoms before quickly fighting off the protozoan, which thereafter lies dormant inside brain cells—or at least that’s the standard medical wisdom.

But if Flegr is right, the “latent” parasite may be quietly tweaking the connections between our neurons, changing our response to frightening situations, our trust in others, how outgoing we are, and even our preference for certain scents. And that’s not all. He also believes that the organism contributes to car crashes, suicides, and mental disorders such as schizophrenia. When you add up all the different ways it can harm us, says Flegr, “Toxoplasma might even kill as many people as malaria, or at least a million people a year.”

. . . .after years of being ignored or discounted, Flegr is starting to gain respectability. Psychedelic as his claims may sound, many researchers, including such big names in neuroscience as Stanford’s Robert Sapolsky, think he could well be onto something. Flegr’s “studies are well conducted, and I can see no reason to doubt them,” Sapolsky tells me. Indeed, recent findings from Sapolsky’s lab and British groups suggest that the parasite is capable of extraordinary shenanigans. Toxoplasmosis, reports Sapolsky, can turn a rat’s strong innate aversion to cats into an attraction, luring it into the jaws of its No. 1 predator. Even more amazing is how it does this: the organism rewires circuits in parts of the brain that deal with such primal emotions as fear, anxiety, and sexual arousal. “Overall,” says Sapolsky, “this is wild, bizarre neurobiology.”

Flegr has given uninfected and infected people batteries of psychological tests and found significant differences. The differences vary between sexes, and in some cases are opposite for men in women. One common effect is a greatly reduced fear response, which is why Flegr thinks Toxoplasmosis causes car accidents. Another is that infected people, especially women, are quicker to do what the experimenters ask without asking questions:


the infected women were the most trusting of all subjects. “They just did what they were told,” he says.

I thought, as I read this, that if Toxoplasmosis rewires the brain regions associated with fear and sexual arousal, and makes some people absurdly trusting, then we finally have an explanation for the peculiar sexuality of modern women. How else to explain all those women erotically obsessed in equal degree with cute kittens and dangerous vampires, and who can't resist men who are obviously total assholes?
Posted by John at 11:32 AM