Treasures of Kazakhstan: More Wonders from the Altai 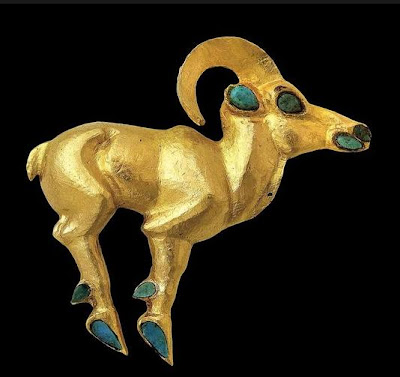 The famous frozen tombs of the Altai are in Kazakhstan now, and the treasures coming from excavations over the past few decades have ended up in Kazakh museums. A traveling exhibit of treasures from the tombs has come to New York, and the Times has a slide show. Above, an ornament in the form of an argali, a kind of mountain sheep, ca. 700 BC. 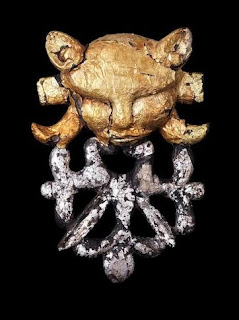 A horse ornament in the form of a cat face, made of wood covered with paint and gold leaf, ca. 300 BC. 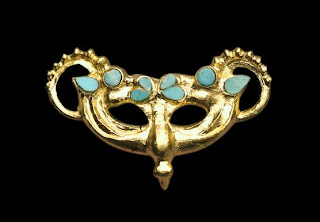 Ornament in the form of a snow leopard face, formed from two ibex heads, ca. 700 BC. 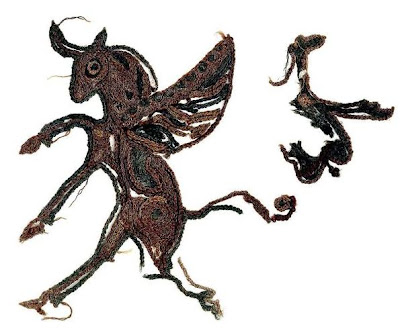 Embroidery of a winged bull, from a horse blanked, ca. 300 BC. 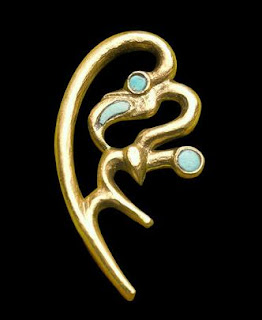 The Times slide show is great, but the accompanying article is not. It is full of stuff like this:


these nomads were looked down on — the other often is — as an intermediate or an arrested stage in cultural evolution. They had taken a step beyond hunter-gatherers but were well short of settling down to planting and reaping, or the more socially and economically complex life in town.

But archaeologists in recent years have moved beyond this mind-set by breaking through some of the vast silences of the Central Asian past. These excavations dispel notions that nomadic societies were less developed than many sedentary ones.

Because, you know, the first historian to treat nomads as more or less the equals of settled people was Herodotus, in about 450 BC. Europeans have been fascinated by Scythian, Sarmatians, and other nomadic peoples ever since. Yes, some settled Europeans looked down at nomads, but others looked up to them, and the settled people of eastern Europe found themselves ruled by nomads on several occasions.

Some historians are so caught up in the fantasy of overturning old orthodoxies that they can't imagine any other way a discovery could be interesting. These objects are cool, ergo, they must overturn old ideas about nomads! Why else would anyone care about them?