Microraptor, Dinosaur Feathers, and the Evolution of Birds The amazingly detailed fossils of the pigeon-sized dinosaur Microraptor, which lived about 130 million years ago, have allowed a detailed reconstruction of what it looked like. 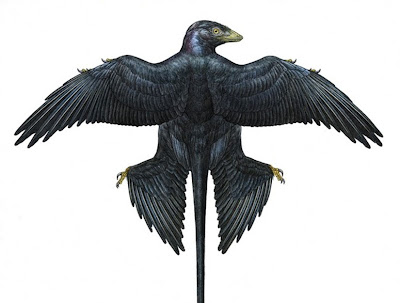 Not only have paleontologists shown that it had four wings, they have figured out that the feathers were probably black and shiny.

I think the most important thing about the discovery of all these feathered dinosaurs is the light it sheds on the evolution of birds. After all, one of the weirdest things about birds, compared to other living animals, is their feathers. Feathers are complex organs that come in many different types with many different uses. The discovery that many small dinosaurs had feathers for tens of millions of years shows that their appearance in birds is not remarkable, and it further emphasizes how closely related birds and dinosaurs are.
Posted by John at 7:21 PM