Retro-Maoism and the Firing of Bo Xilai 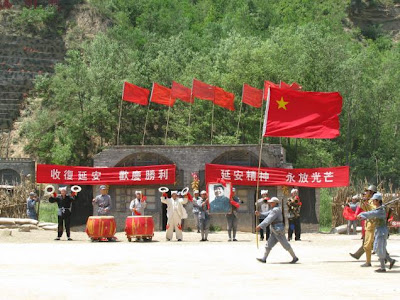 Bo Xilai has been dismissed from his post as party chief in Chongqing, China. Last summer he orchestrated a sort of retro-Maoist campaign to celebrate the party's 90th anniversary, and had been pushing for a more socialist line in party policies:


Unlike most Chinese leaders who prefer to avoid public attention, Bo had built a loyal following and attracted media coverage in his south-central Chinese mega-city. He cultivated a modern-day personality cult among China’s so-called “new Leftists,” who supported his push for a more equitable wealth distribution and his campaign for Mao-era pageantry, including organizing mass events to sing patriotic songs.

Bo's dismissal means the faceless technocrats who have been leading China will continue to do so, and will continue their policy of gradual change, avoidance of mass politics, and a focus on economic growth rather than fairness. No more trying to bring back the Little Red Book and the Loyalty Dance.
Posted by John at 8:56 AM