Dan Richards and his Mountain Lion, or, Hunters and Conservation 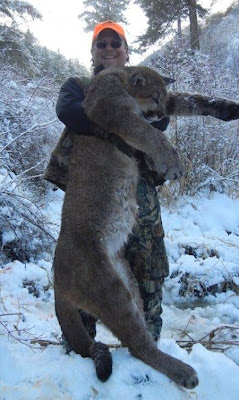 This photograph has Dan Richards, President of the California Game Commission, in political trouble. Richards shot the big cat in Idaho, where hunting them is legal. Western Outdoor News had this to say about the story:


California Fish and Game commissioner Dan W. Richards travelled deep into the wicked terrain of Idaho's Flying B Ranch to fulfill a long-held goal. "It was the most physically exhausting hunt of my lifetime. Eight hours of cold weather hiking in very difficult terrain. I told the guides I appreciated the hard work. They were unbelievably professional, first class all the way," he said. Richards said he took the big cat over iron sights using a Winchester Centennial lever action .45 carbine. Asked about California's mountain lion moratorium, Richards didn't hesitate. "I'm glad it's legal in Idaho."

Among those Californians calling for Richards to resign is Lieutenant Governor Gavin Newsom, who sent a letter to Richards saying


As president of the commission, I am sure you understand that merely complying with the conservation laws of California is not the standard by which the Commission or its members are measured. As is stated on the Commission's website, your actions should be in the 'best interest of the resource and truly reflect(s) the wishes and needs of the people.'

According to the Huffington Post, thousands of people have signed online petitions calling for Richards' removal.

I have to write about this because it exposes a big fault line in Americans' understanding of each other. I don't have an opinion about whether Richards should resign; he is a political appointee, and he probably should have known that letting a hunting magazine publish that picture would cause a furor. But there is absolutely no contradiction between hunting and conservation, or between Richards' dual roles of mountain lion hunter and chief of mountain lion preservation. In America, hunters care much more about the conservation of wild areas and wild animals than the average non-hunter.

This makes many liberal urbanites scratch their heads; how can those rednecks claim to love animals while  shooting them?  (A blogger at LA Weekly wrote, "Richards is a lifetime member of both the Society for the Conservation of Bighorn Sheep and the National Rifle Association. Huh.") But if you tell the same people that ancient hunter gatherers revered the animals they hunted and practiced careful conservation, they nod and get warm feelings about Indians and their nature-loving ways. Modern hunters are not so different. When he set out on foot into the snow-covered mountains, with a simple gun, Richards was after the experience that defined manhood for millennia: face-to-face confrontation with a dangerous animal. And don't try to tell me that Indians only hunted for food, because that's crap. They sometimes hunted for the thrill of it, or for tribal initiations, or to get valuable feathers and claws, for lots of other reasons.

It is a plain historical fact that the biggest promoters of game conservation in America have been hunters. Quick, name a President who made wilderness preservation a big part of his political program -- if you didn't think first of big-game hunter Teddy Roosevelt, you should probably read a little more. One of the most successful programs to bring back a wild species has been the restoration of the wild turkey across eastern North America, an effort led and funded almost entirely by hunters.

Ok, sure, there are bad hunters who just like to shoot guns and see something bleed, the rarer the better. But there are also many people who hunt (including some of the Indians I know) who do so as a way to assimilate to nature and experience the wild world in the deepest possible way. If mountain lions themselves are not wicked, then humans who act as predators are not necessarily wicked, either.

In our crowded continent, wild animals have to be managed. For some species in some places, that means recruiting hunters or even paying them to kill as much as they can -- e.g., deer in Maryland. For others, like mountain lions in California, preservation requires a hunting ban. It is the job of the Game Commission to make these determinations based on the data, not to get all emotional about cute, fuzzy animals.

And listen up, liberals, if you want small town Americans to stop voting Republican, you had better stop calling them names for practicing what is really one of the oldest of all human activities, and one of the most ennobled by tradition.
Posted by John at 8:33 AM