What Happens to Some Men in War 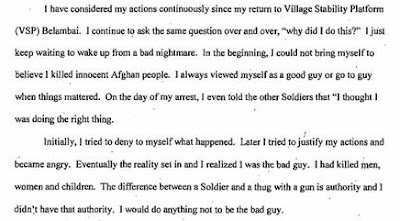 Sgt. Robert Bales, who pleaded guilty to murdering 16 Afghan villagers in 2012, wrote a very interesting letter to the judge considering his plea for clemency. Not saying, mind you, that he deserves clemency, but he is hardly the first soldier to go crazy in the way he did, so what he says about his experience has a claim on our attention:

"I planted war and hate for the better part of 10 years and harvested violence," he added. "After being in prison two years, I understand that what I thought was normal was the farthest thing from being normal." . . .

Bales, an Ohio native and father of two from Lake Tapps, Washington state, shot 22 people in all, including 17 women and children, during pre-dawn raids on two villages in Kandahar Province in March 2012. The massacre prompted such angry protests that the U.S. temporarily halted combat operations, and it was three weeks before Army investigators could reach the crime scene.

Bales pleaded guilty in a deal to avoid the death penalty, and he apologized in a statement at his sentencing in 2013. He described the perpetual rage he felt, his heavy drinking and reliance on sleeping pills, and his steroid use. He also said he couldn't explain what he did, a sentiment he repeated in the letter.

"Over my past two years of incarceration, I have come to understand there isn't a why; there is only pain," he wrote. . . .

"I didn't want to make a decision on the ground and lose one of my guys," he wrote. "Normally that would be a good thing, but now I know it made me paranoid and ineffective."

Over his combat tours he came to hate "everyone who isn't American," he wrote, and he became suspicious of local residents who might be supportive of those fighting Americans.

"I became callous to them even being human; they were all enemy. Guilt and fear are with you day and night. Over time your experiences solidify your prejudice," he wrote.

To me one of the biggest errors Bales made, and which seems to be at the heart of how the US military talks and thinks about war, is dividing the world into good guys and bad guys. Most of the time moral judgment falls more properly on the act than the person: "hate the sin, love the sinner" is the Christian formulation. It is easy for people involved in war or any other kind of strife to believe that since they are on the right side -- the good guys -- whatever they do is right. But in fact people whose cause is generally right commit terrible crimes in all conflicts. Being in the right should not make you indifferent to what you do, but ever more careful about it.

Meanwhile, let me emphasize again that no good comes from sending young men to fight again and again until they are "consumed by war."
Posted by John at 9:23 AM

That's all war does. It consumes. People, places, everything.

But that is just a harsher version of what our society does everyday to those who 'decline' to be fitted with our societal norms. Perhaps it is not understandable until one walks a mile in the individual's shoes, but it is real and common.