The Decline of Summer Jobs 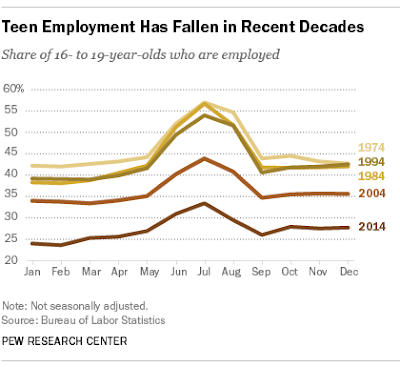 Interesting data from Pew showing that since 1994 there has been a dramatic decline in teen employment, especially during the summer. My family has been a leader in this trend; my wife and I both worked as teenagers, but none of our children has had a job before leaving high school. Why?


Researchers have advanced multiple explanations for why fewer young people are finding jobs: fewer low-skill, entry-level jobs than in decades past; more schools restarting before Labor Day; more students enrolled in high school or college over the summer; more teens doing unpaid community service work as part of their graduation requirements or to burnish their college applications; and more students taking unpaid internships, which the Bureau of Labor Statistics does not consider being employed.

But Matt Yglesias dug up another possible explanation: teens aren't working because they don't want to: 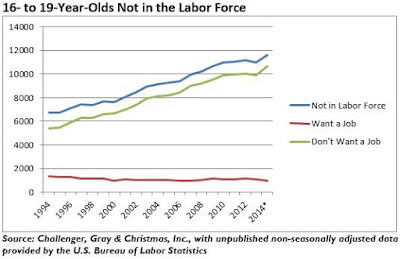 This explanation does not necessarily contradict the ones offered by Pew. One of the main reasons teenagers want jobs is that their friends have them; another is that their parents are insisting. But if jobs are scarce, the first reason disappears and the second may be attenuated; it certainly was for me, after I watched various young people search for jobs and fail to find them.

I have a feeling that much of this is driven by how much nicer it is to hang around your parents' house than it used to be. We live in bigger houses now, full of electronic entertainment, and the model of parenting has shifted toward something less authoritarian and confrontational. I always doubted that working at low-wage jobs was really very valuable for young people anyway.
Posted by John at 11:59 AM

I would add to these factors two more related ones:

Jobs at fast food joints are now going to adults, so are not available to teens

Teens no longer see such jobs as places to work w/ their friends, since the jobholders are primarily adults.

But yes, many adolescents are simply hanging around the house because there is so much to do hanging around the house. When I was a teen, there were books. Nothing on TV daytimes worth watching. No way to watch movies. No AC. I did not actually have a paid "job" till I graduated but I babysat-- a LOT! Preferably for people who did have AC . So I did work.