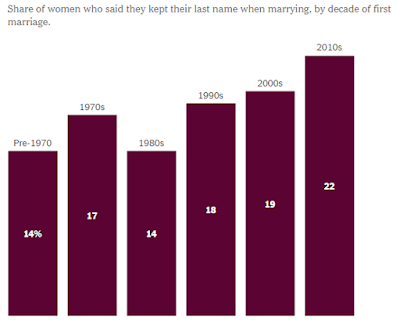 One of the many bits of unresolved flotsam left from the patriarchal era is the question of names. There was an amusing incident last year in my office when a recently married female colleague complained that her husband had put her under a lot of pressure to take his name, which she didn't really want to do. I said, "I told my wife that it was entirely up to her what name to use and was accused of indifference and not loving her enough." A male colleague added, "I had the same experience." (So guys, there is no right answer to this question; be prepared for that.) This female colleague ended up taking her husband's name legally but is trying to keep her maiden name professionally, one of the many coping strategies spawned by the unresolved issue.

Anyway the Times recently printed the graph above, which shows that despite all the battles over feminism and the like the percentage of married women keeping their maiden names really hasn't changed very much. I found this surprising; I would have thought the number would be much higher than 22 percent. This is probably because there are major class and educational differences, with "higher income urban women" much more like to keep their birth names; about half the brides who have appeared in the Times style section have done so. Surely female academics are similar.

But among regular Americans, taking the husband's name is still the norm. Rather than lingering patriarchy, I see this as a matter of just not knowing what else to do. If you plan to have children, you have to face the question of what to call them, and I see the appeal of  wanting the whole household to share one name -- we are the Bedells, which is nice. Hyphenating is a one-generation solution. Smith and Jones can name their daughter Heather Smith-Jones, but what happens when she marries Bob Gretsky-Lamarr?

So I don't have any recommendation, just my usual hope that people will do what works for them and not judge each other about it.

While I am on the subject, I have to say that I am also a little puzzled by the continued prominence of weddings in the dreams of young women. I always imagined that women who were planning careers for themselves (or fretting about not having one) would have less thought to spare for their weddings, but if anything weddings seem to be getting ever bigger and more elaborate. Explanations?
Posted by John at 7:45 AM