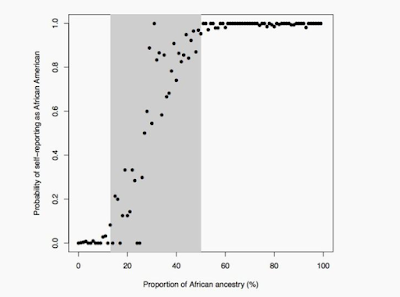 Interesting chart from Vox comparing percentage of African genes vs. identity. The cut-off point seems to be around 1/4; Americans who are more than 28% African by descent generally identify as black.

This has of course been a huge issue for American Indians for a long time now. Many Indians who are active members of their tribes are less than 50% Indian by descent; the big PBS show on Indian history that ran many years ago featured a blond chief from some northwestern tribe. Does this matter? For various legal purposes the Feds use (or used to use) a 1/16 rule, allowing anyone who was at least 1/16 Indian to claim tribal membership. But rumor has it that many eastern Indians, including the leaders of the Foxwoods tribe, have been tested and show no Native ancestry at all. Should that matter?

Between the 1960 and 1970 censuses, the number of people in North Carolina who claimed to be Cherokee more than doubled. Obviously this was a matter of self-definition; since the 60s made it cool to be an Indian, many people with a small amount of Indian ancestry began to focus on that part of their heritage. Were they telling the truth?

I have occasionally found it amusing that while in America we have various laws that mandate counting people by race, we have no legal definition of race, and generally we allow people to claim whatever racial status they want. The rule for minority contractors is that you can claim to be black or Indian as long as you do so consistently; if you live as black all the time, it doesn't matter how many African genes you carry, but on the other hand you can't claim to be white in most circumstances and then write Black on your application to be a Disadvantaged Business Enterprise.

So in this matter we have been post-modern for some time.
Posted by John at 7:27 AM

Eventually we have to remove the factor of "race" from our governmental systems.

If you're applying to become a Disadvantaged Business Enterprise, the requirements should have nothing to do with your ethnicity, genetics, or appearance, and instead have everything to do with whether or not you are demonstrably disadvantaged.

A good friend of mine is overwhelmingly Southern European in their ancestry and has always identified essentially as a third generation Italian American, but their grandfather had technically been an Italian Argentine, and thus they qualified as being a quarter "Hispanic". Hence, my friend's parents pressured them to exploit this fact when seeking financial aid for college and when applying for jobs, much to their personal discomfort and chagrin.

The intentions behind these systems aren't bad. If you have disproportionate numbers of ethnic minorities being disadvantaged, clearly there's some underlying problem - and while it's treating the symptoms rather than the sickness, giving money to those who are disadvantaged goes a long way toward making their lives better until the underlying problem CAN be solved.

But if your primary determination of whether someone deserves asisstance is their race rather than their economic situation, you've uttely lost perspective. Just help the people who actually need help, regardless of their ancestry or appearance. A struggling individual should not be denied aid simply because they can't demonstrate certain arbitrary genetics, while a successful and secure individual should not be granted unnecessary benefits simply because they can demonstrate such.