The Selective Advantage of the Lactase Gene 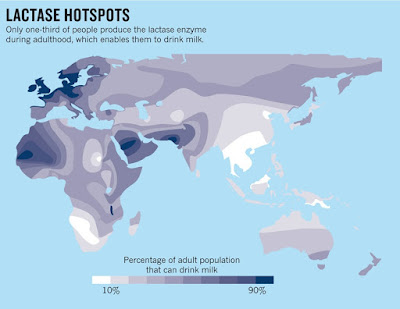 Today, most northern Europeans can digest milk; most adults in the rest of the world cannot. This trait seems to trace back to a single mutation that happened around 7,500 years ago, among the early Neolithic settlers of Hungary or the Balkans. In evolutionary terms, 7,500 years is not very long, so for this gene to become universal it must have conveyed quite an advantage.


In a 2004 study, researchers estimated that people with the mutation would have produced up to 19% more fertile offspring than those who lacked it. The researchers called that degree of selection “among the strongest yet seen for any gene in the genome”.

Why would that be? Well, European farmers ate a grain intensive diet; for poorer people this was not supplemented with very much meat or fish. So they got their animal protein, calcium and vitamin D from milk and cheese. Those who could not were weakened, got sick and died.

Incidentally the other lactase hotspots, in west Africa and the Middle East, depend on completely different mutations, so are unrelated to the European case.
Posted by John at 7:14 AM

"Incidentally the other lactase hotspots, in west Africa and the Middle East, depend on completely different mutations, so are unrelated to the European case."

I'm assuming they still coincide with the husbandry of milk producing animals, though, despite being different genetic mutations.