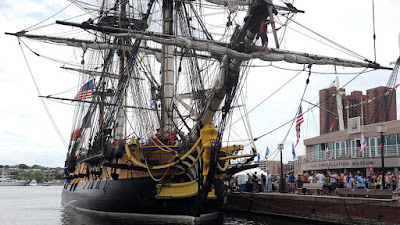 L'Hermione, a faithful reconstruction of the French frigate that carried the Marquis de Lafayette to America in 1779, has completed its Atlantic crossing and is now touring the US east coast. 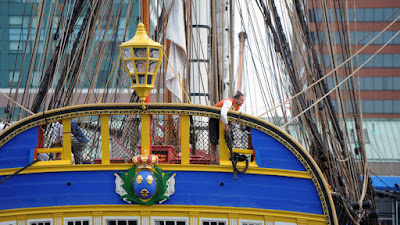 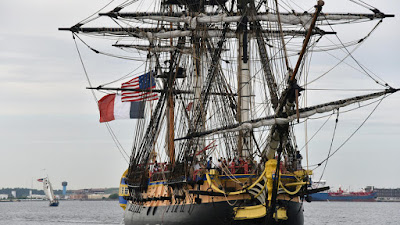 Today it is in Baltimore. 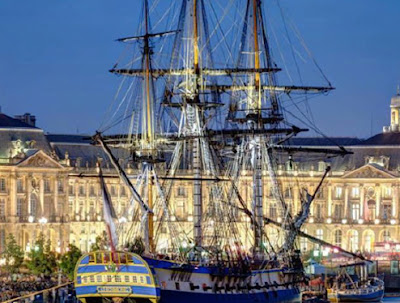 I love projects like this -- just an idea that some French guys came up with and then made real, sailed mainly by volunteers who just felt like it. One of the great things about our wealthy age is that we have money to spare for fabulous larks like rebuilding ancient ships and sailing them around the world. 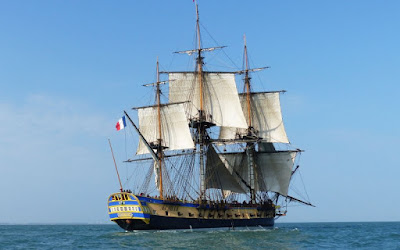 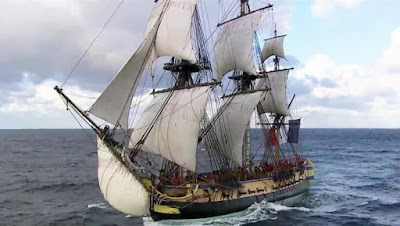 L'Hermione under sail. These frigates were among the greatest machines humans have ever built, strong enough to sail across every ocean, nimble enough to ascend rivers and enter hidden harbors, with enough men and guns to face down any pirate. These were the workhorses of European navies, used for exploration, scouting, supporting amphibious landings, delivering important people and messages, showing the flag. In them the ancient technology of sailing ships reached an amazing peak -- "she sails like a bird," said Lafayette of the first Hermione.
Posted by John at 11:29 AM

The big problem I have with most of these reconstructions, and which is present even with this one in particular, is that they build them to a larger scale than the originals.

The new ship has the same beam width and draught as the original, but it is a good 20 meters longers and has over twice the displacement.

Some of the weight I can overlook as allowance for the emergency engines and fuel, but the new ship weighs as much in a regular configuration as the old one did at it's maximum load - about 1160 metric tons. This is doubly baffling considering the cannons on the new ship are lightweight non-operational dummies, and they aren't carrying any powder or shot either.

And all that aside, I cannot for the life of me fathom why they made the thing sixty feet longer than the original.

Further areas where weight should ostensibly be saved:

A crew of only 72, rather than 255. Not only does that save on the physical mass of fewer people, but also on the weight costs of storing food and, much more significantly, tons of fresh water for all those aboard.

The "lark" is, in my opinion, a way to keep our imaginations, and thus our endeavors, alive.