The Amazon on the Cosmetics Case 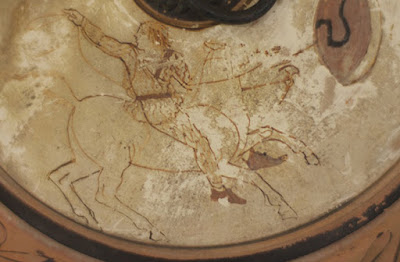 This image, painted between 480 and 450 BCE, shows a mounted Amazon lassoing a Greek warrior. What particularly interested me about this work is the context:


“It is the only ancient artistic image of an Amazon using a lariat in battle,” Adrienne Mayor, a research scholar at Stanford University’s departments of classics and history of science, told Discovery News. . . . “ The vase would have held a Greek woman’s intimate make-up or jewelry. The images on the box suggest that women enjoyed scenes of Amazons getting the best of male Greek warriors,” Mayor said.

So, a bit of sexual subversion marketed to upper class Greek women.
Posted by John at 7:14 AM