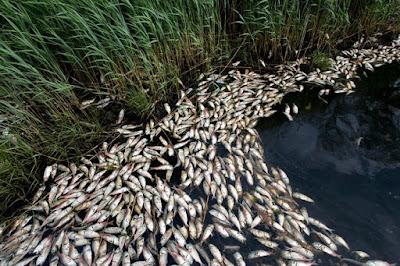 At the eastern end of Long Island is a complex of delightful bays wetlands that have helped draw a million people to Southampton County. Sadly, these ecosystems are not very healthy. As with many other American estuaries, the bays are regularly troubled by algae booms and low oxygen levels that are caused by too much nitrogen in the water. But whereas in most places the main source of nitrogen is fertilizer washed from farm fields, on Long Island it is human waste. Hundreds of thousands of people on Long Island rely on septic tanks and drain fields to process their sewage, and as a result millions of gallons of untreated waste flow into the streams and bays. Hence the repeated mass die-offs of fish and turtles.

Septic tanks are an ok technology as long as people are living at low density; in farm country they are not a problem. But when population density rises, they cease to be effective. Many American suburbs are effectively floating on an underground lake of sewage, and when all that crap flows into streams or wetlands the effect can be disastrous.

And here is where the politics comes in. Tea Party types love septic tanks, which are the waste management expression of rugged individualism. The government is minimally involved -- each homeowner takes care of his own property. No need to pay monthly bills to some public or semi-public utility. Plus, septic systems are very common in the rural and exurban neighborhoods where the Tea Party is strongest. So wherever local or state politicians have tried to ban the construction of new homes with septic systems, or to force communities to pay for new sewers, they have met big opposition. One of the main issues that brought a conservative Republican governor to liberal Maryland was moves by Democratic politicians to raise sewer fees to pay for upgrades, limit stormwater runoff, and other measures to protect the Chesapeake Bay. Because once population density rises beyond a certain level, pollution can only be controlled by expensive sewer systems and intrusive regulations.

I bring all this up because I think it is a good lesson in the relationship between politics and population density. The more crowded our living conditions, the more we need intrusive government to make things work. For national governments to have large numbers of detailed regulations is a recent phenomenon, but cities have had them since ancient Babylon. Medieval cities were in some ways more closely regulated than modern ones, since medieval governments liked to fix things like the price and dimensions of a loaf of bread, the wages of many workers, and the size and position of windows.

In crowded places, intrusive government is necessary to protect us from each other; in an increasingly crowded country (and planet), many of those regulations have to be nationwide. If we want clean air, clean water, and waterways full of fish, there is no alternative.
Posted by John at 7:21 AM

The problem, of course, is that regulation is directly at odds with Capitalism. It seems Americans have become too far removed from the knowledge of what a lack of regulation can result in. The days of Robber Barons and the misery of The Great Depression are too distant, no longer present in living memory.