Iceland vs. Ireland, or, Bailing out Banks vs. Prosecuting Bankers 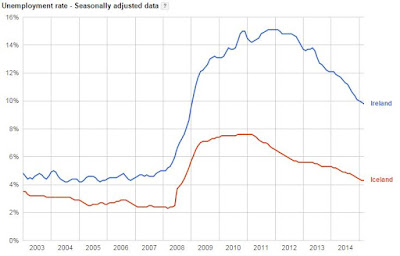 Before the crash, Iceland and Ireland both had bloated, overheated banking systems. After the crash, Ireland bailed out its banks and imposed strict austerity to reduce its deficit. Iceland let the banks fail, prosecuted their executives as criminals, and then spend lots of money to restore the economy. Behold the results. In terms of unemployment, Iceland weathered storm better than almost any other country.

Now nothing is free. Iceland suffered a bout of high inflation, the result of letting their currency depreciate in a place that imports many necessities of life. And they also ran up a lot of debt. But by spending its way out of recession Iceland ran up less debt than Ireland incurred when it assumed the debts of its failed banks.

Serious people like to say that while it was unfortunate that governments had to bail out the banks to protect the economy, there was no alternative. The example of Iceland suggests that this is not true.
Posted by John at 5:27 PM