Some Europeans are Done with War 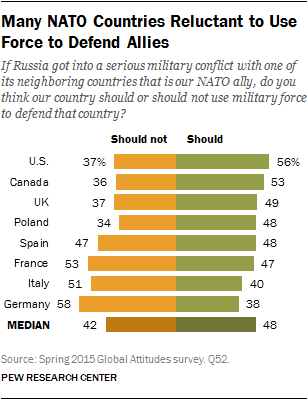 Interesting survey results from Pew, which show that voters in Germany, Italy and France are opposed to helping defend their NATO allies if one is attacked by Russia. In contrast the Anglo-Saxon bloc is a lot more aggressive.

I wonder what this means. The massive coverage of events in Ukraine (much greater in Europe than here) has certainly appraised Europeans of what Putin's Russia is capable of; likewise anyone who follows the news even a little would know that people in Poland and the Baltic states are very nervous. Do these people simply dismiss the possibility of war in central Europe? Are they tired of hearing about the threat posed by Russia, which seems to them gotten up by politicians who want attention and money? Are they too focused on their own problems to care? Do they assume the Americans -- who seem so eager to fight anybody these days -- would do the fighting for them?

Refusing to aid Poland if they were menaced by Russia is pushing pacifism too far for me, and I consider myself an anti-war sort of fellow. So the large number of Europeans taking that position puzzles me. I have to think this is based on regarding the whole Ukraine crisis is a sort of political game rather than a real threat, and therefore seeing this question as more of an insult to their intelligence than a real question about what they would support in a crisis.
Posted by John at 7:12 AM

The impression I get is that in Germany, at least, there is some sympathy for Russia. According to the Times, opposition to aiding an ally threatened by Russia is strongest in the former East Germany.

In France, meanwhile, I would expect some continuing hostility to Anglo-Americans and their priorities. The French are hardly pacifists when it comes to what they still regard as their sphere in Africa.

And some Europeans seem to admire Putin for his strength, and for his standing up to the hypocritical Americans.

Part of the problem is there's still a LOT of latent racism in Europe, and the Poles are still a broadly hated people.

Other stereotypes also paint them as a country of radical "Communists", or extreme antisemites - both of which strike as being laughably absurd. There's even the occassional lingering hatred over grievances that originated during the Rennaissance, when the Polish Lithuanian Commonwealth was still a great power.

So when Russia rattles their sabre at a bunch of "worthless drunken thieving idiot intolerant communist zealots", a lot of Europeans just think "Who cares? As long as they don't bother me, let them sort it out among themselves."

That said, the North Atlantic Treaty is an interesting beast.

Article Five is the part that establishes a defensive pact, treating an attack any one member as an attack on all of them. But it doesn't strictly necessitate, a war response - it merely makes provisions for the possibility of one.

Article One, meanwhile, expressly requires the organization "to settle any international dispute in which they may be involved by peaceful means", and "to refrain in their international relations from the threat or use of force".

And the whole thing is framed in relation to the United Nations and the principles and procedures thereof - and they kind of have a history of being slow to take military action. Not without good reason, to be honest - but it's something people have rankled over in the past, and I imagine people will continue to rankle over it in the future.

I really do expect NATO to exhaust all diplomatic options before resigning to a military response - and to be honest, I think that's the most logical and sane response available, given the weirdness of modern politics and war.