The Sculptures of the Sebasteion at Aphrodisias 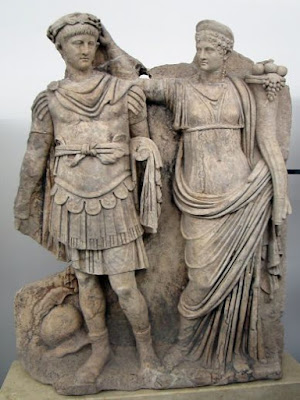 The Sebasteion at Aphrodisias is one of the most remarkable modern discoveries from the ancient world. Excavated in 1979-81, it produced an astonishing array of ancient sculpture. (Nero crowned by his mother Agrippina) 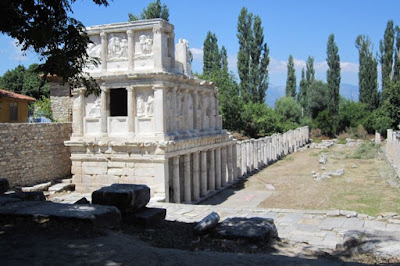 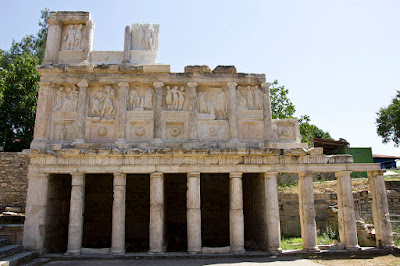 "Sebasteion" is Greek for "Temple of Augustus." The Sebasteion was dedicated both to the Julio-Claudian emperors and to Aphrodite, their ancestress. Its construction stretched over two generations, from ca. A.D. 20 to 60, from the reign of Tiberius to that of Nero. Most of the cost was born by two leading local families. Aphrodisias was one of the first towns in Asia Minor to embrace Roman rule, and they benefited from this through privileges and imperial largesse. The Sebasteion was the local elite's way of acknowledging their patrons. 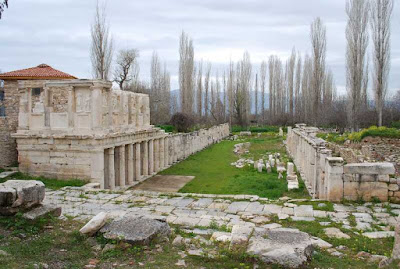 You can see from the plan that one of the temple's main features was a processional way flanked by two porticoes, each three stories high. 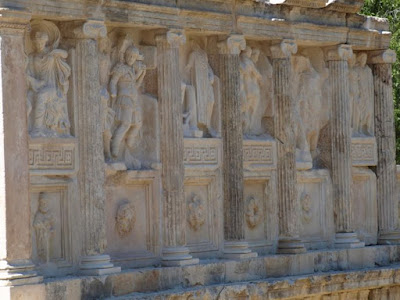 The complex was about 300 feet (90 m) long, and the entire way was lined with two levels of sculptured reliefs. 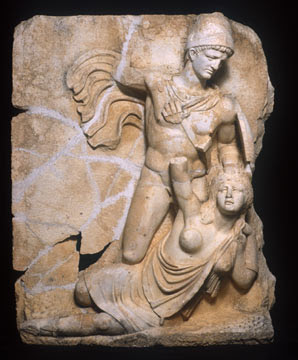 This would have required 190 sculptured panels, of which 70 were recovered during the excavations. The panels depict a mishmash of classical myth with mythified deeds of the Julio-Caludians; above, Caludius conquers Britain. 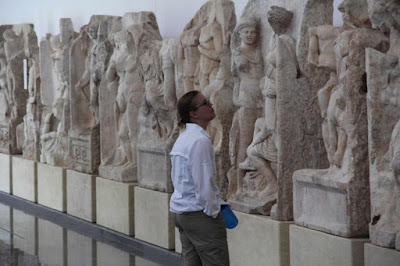 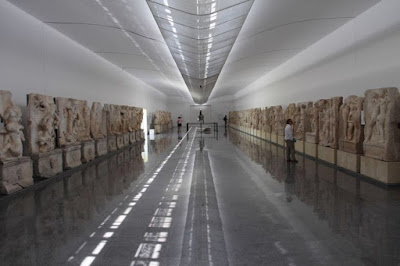 What you see at the site is all casts; the original sculptures have been moved to the nearby museum, where they are displayed in a great hall. Which must be a bit overwhelming, especially if you arrive with a tour and only have half an hour, but still. How amazing. 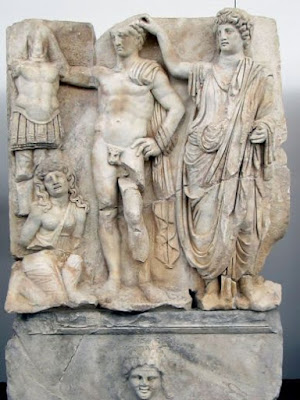 The web site at New York University, the base of chief excavator Kenan Erim, says:


The reliefs of the two buildings had very different programs and used different designers and executing workshops. And, although there was no overriding unified program, the subjects of the reliefs are divided into distinct themes and categories of subjects according to the four registers made by the two levels in each building.

Of the reliefs from the North Building, which collapsed earlier and was cleared while the South Building was still in use, much less survives; but enough is preserved to reconstruct its broad program. The upper storey had imperial and allegorical subjects, while the lower storey carried a series of conquered peoples and places of the Roman empire, each treated as a single statuesque female personification standing on an inscribed base. The inscriptions record peoples from Spain in the furthest west to the Arabs and Judeans in the east. There were fifty such figures, and their designs were no doubt borrowed directly from a monument in Rome. 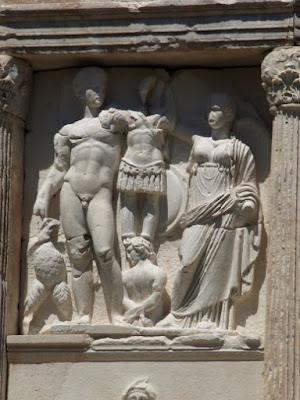 The South Building was never substantially cleared after its final collapse, and more than sixty of its reliefs survive. The upper‘ storey reliefs juxtaposed traditional Greek gods with Roman imperial scenes and figures of victory. The Roman emperors from Augustus to Nero are treated in a strikingly elevated, Hellenistic manner, designed to present them as part of a new enlarged Olympian pantheon -- an idea captured in the phrase of one of the inscriptions which dedicated the building "to the Olympian god-emperors" ( tois theois Sebastois Olympiois ). Several of these reliefs highlight the conquests of Claudius and the young Nero.

The lower storey reliefs featured a remarkable series of forty-five Greek mythological scenes. Many were arranged in broad groupings of familiar scenes of favorite figures, such as Herakles and Dionysos, but there was no single sequential mythological program. Towards the east end, however, as one approached the Temple, there was a greater concentration of sacrifice scenes and of Rome-related myths, such as those featuring Anchises and Aeneas. And here the design made explicit what is implied in the whole complex, the close connection between Greek myth-history in the lower level and the godlike Augustan regime in the upper storey. In spite of the wide range of styles and levels of execution between individual reliefs, it was perhaps this juxtaposition of Greek and Roman, of myth and history, moulded visually by style and iconography into a single continuum, that was the most striking effect of the complex viewed as a whole. 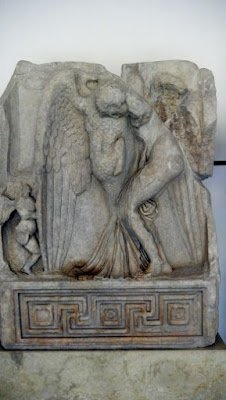 Astonishing. The three reliefs above, from top to bottom: Emperor and People of Rome, an Emperor Erecting a Trophy of Victory, and the Rape of Leda. 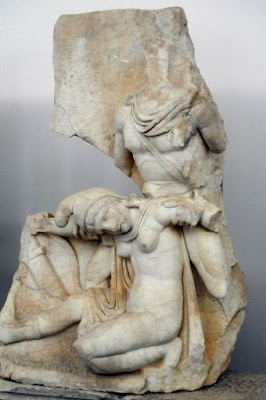 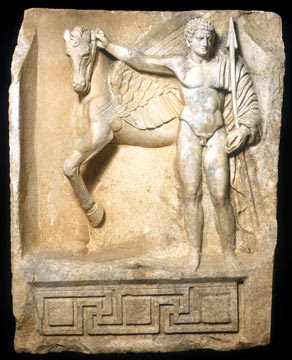 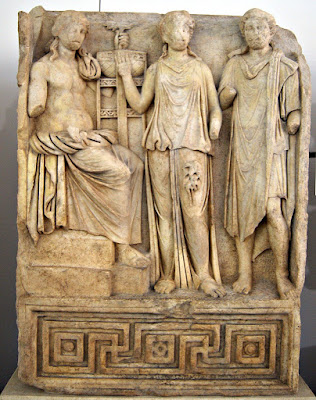 The Sibyl of Cumae. 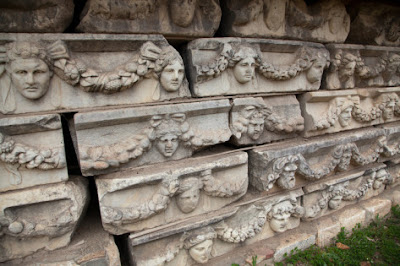 And that's just the main panels; the whole of the complex was decorated with columns, reliefs and so on, including all of these masks. What a remarkable place. And what a world the Roman Empire was. 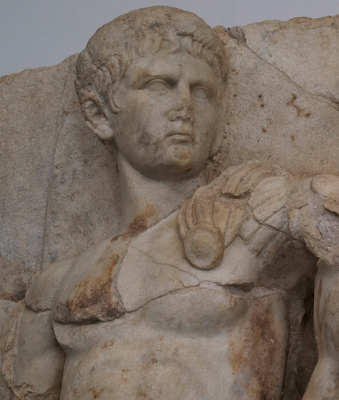