Gay Marriage is the Law 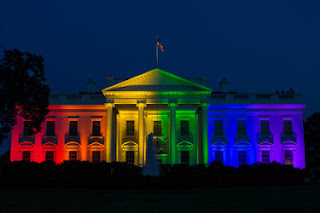 
No union is more profound than marriage, for it embodies the highest ideals of love, fidelity, devotion, sacrifice, and family. In forming a marital union, two people become something greater than once they were. As some of the petitioners in these cases demonstrate, marriage embodies a love that may endure even past death. It would misunderstand these men and women to say they disrespect the idea of marriage. Their plea is that they do respect it, respect it so deeply that they seek to find its fulfillment for themselves. Their hope is not to be condemned to live in loneliness, excluded from one of civilization’s oldest institutions. They ask for equal dignity in the eyes of the law. The Constitution grants them that right.

It remains to be seen if this will lead to the debate gradually dying away, or if this will become an ongoing, festering political sore like abortion.

My sense is that most people will get used to gay marriage, and that within a decade opposition will be a fringe cause. We'll see.

Meanwhile, here is Justice Kennedy's explanation of how the Constitution has come to guarantee rights not imagined by its authors:


The nature of injustice is that we may not always see it in our own times. The generations that wrote and ratified the Bill of Rights and the Fourteenth Amendment did not presume to know the extent of freedom in all of its dimensions, and so they entrusted to future generations a charter protecting the right of all persons to enjoy liberty as we learn its meaning. When new insight reveals discord between the Constitution’s central protections and a received legal stricture, a claim to liberty must be addressed.