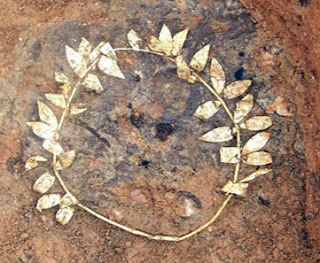 Fascinating finds from a Hellenistic cemetery that happened to be in the path of the Thessaloniki subway.


An abundance of gold wreaths appear to lay hidden in a subway network in Greece. Indeed, excavation work during construction of a new subway in the northern city of Thessaloniki, Greece’s second largest city, has revealed another gold wreath – the ninth since work started in 2006. Found on the site of an ancient cemetery at what will be the Dimokratias Station stop, the wreath of olive leaves lay buried for some 2,300 years.