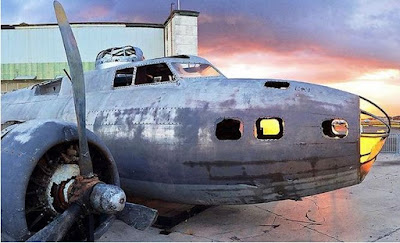 
Here’s a ghost story that’s more than 70 years in the making: Visitors to Oahu’s Pearl Harbor can now visit a rare World War II bomber called the Swamp Ghost that was lost for decades but is now being restored. The Swamp Ghost, a B-17E bomber, is among the newest acquisitions of the Pacific Aviation Museum on Ford Island.

The B17E was returning from a bombing raid in February 1942 and went after an enemy freighter. It was hit in an ensuing dogfight and although it was leaking fuel, it managed to land in a remote swamp on New Guinea. None of the crew members was hurt and after walking for six weeks, they were reunited with friendly forces. But with pitched battles raging, the plane was written off and forgotten. 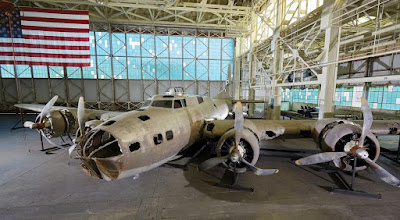 More from the project web site:


High above recently captured Rabaul, New Britain, and piloting a fully loaded B-17E Flying Fortress, Capt. Frederick “Fred” C. Eaton, Jr. had just spotted his target – a 10,000-ton enemy freighter. As he lined up to unleash his payload, the bomb bay doors malfunctioned. The crew worked feverishly to open the doors as he circled for a second attempt. Japanese anti-aircraft batteries zeroed in on the lone bomber’s altitude and unleashed a hellish barrage, damaging the wings. Lining up the target once more, he went in. This time, the doors opened and the bombs fell toward their target. As if on cue, Japanese fighters swooped in, guns blazing. Eaton and his crew were in a fight for their lives.

The aerial battle raged, bullets and cannon shells riddling the Flying Fortress as it ran for cover. In the skirmish, tail gunner John Hall claimed an enemy aircraft while waist gunners William Schwartz and Russell Crawford added two more claims to the tally. In the aftermath, Eaton believed the port wing was bleeding fuel from an unexploded flak round. Knowing he wouldn’t reach the safety of the refueling field at Port Moresby, New Guinea, he flew as far southwest as the fumes could carry them. Salvation revealed itself just as the crew determined the stricken bomber couldn’t climb over the towering Owen Stanley mountains — an isolated swamp in the foothills of the New Guinea mountain range. Eaton slid the heavy aircraft into the swamp water for a wheels-up landing. The B-17 slewed sideways and settled in the deep kunai grass without breaking up. Despite the running battle and the crash landing, there were zero casualties. Six weeks and dozens of malaria-infested miles later, Eaton and crew finally reached safety. They were assigned another B-17 and continued to fly for the rest of the war.

(Note that the gunners on American bombers routinely claimed to have shot down more planes than ever flew against them.)

The Smithsonian ran a story on the Swamp Ghost back in 2007, which adds the information that the removal of the plane was very controversial:


Of all the wrecks on Papua New Guinea, none is as fabled as the "Swamp Ghost," a B-17E Flying Fortress that ran out of fuel on an ill-fated bombing mission in early 1942 and was ditched in the Agaiambo Swamp about eight miles inland on the northern coast. There the plane rested, intact and more or less unmolested, in soggy splendor for 64 years—that is, until May 2006, when an American salvager took it apart and removed it. This caused such a controversy that the plane was stopped from leaving the country. It sits crated in a warehouse near the coastal town of Lae. The episode raises what has become a burning issue: Who has the right to sell war surplus and what should be done with it in the face of a burgeoning international market? The debate, which taps into anger over the growing realization that the island's natural resources are being exploited by illegal loggers and rapacious mining companies, has roiled Parliament and the government of Sir Michael Somare, the imposing leader who has served, off and on, as prime minister ever since he led the country to independence from Australia in 1975.

Hunting for relics of the Pacific War is a huge endeavor these days, pursued for fun and profit. Until recently this has not generated much controversy, because there is just so much stuff out there. But as more and more gets found and removed, I expect these questions to come up more and more often.
Posted by John at 8:04 AM

"The episode raises what has become a burning issue: Who has the right to sell war surplus and what should be done with it in the face of a burgeoning international market?"

Maybe I'm missing something, but wouldn't the obvious answer here be that it's technically property of the US Military, with all the legal ramifications that entails?

According to Smithsonian, the U.S. Navy has formally waived all its rights over World War II material, but the other services have not.

That would be the US Air Force that has waived it's rights.

The US Navy still retains their rights to aircraft wrecks and will go to court to fight for those rights.