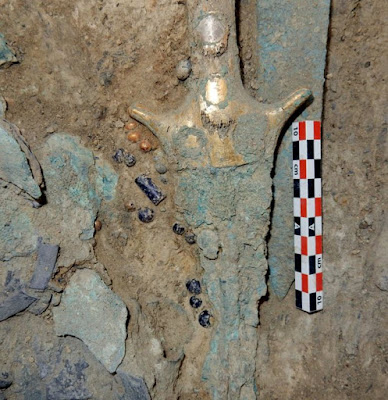 Near the Mycenaean site of Pylos in Greece, archaeologists have excavated a spectacular tomb dating to around 1500 BCE. It contains only a single person, quite different from the family tombs more common in the Mycenaean age.


He lies with a yard-long bronze sword and a remarkable collection of gold rings, precious jewels and beautifully carved seals. Archaeologists expressed astonishment at the richness of the find and its potential for shedding light on the emergence of the Mycenaean civilization, the lost world of Agamemnon, Nestor, Odysseus and other heroes described in the epics of Homer.

“Probably not since the 1950s have we found such a rich tomb,” said James C. Wright, the director of the American School of Classical Studies at Athens. Seeing the tomb “was a real highlight of my archaeological career,” said Thomas M. Brogan, the director of the Institute for Aegean Prehistory Study Center for East Crete, noting that “you can count on one hand the number of tombs as wealthy as this one.” 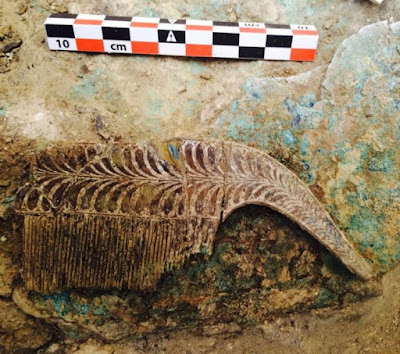 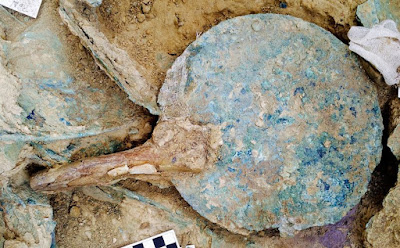 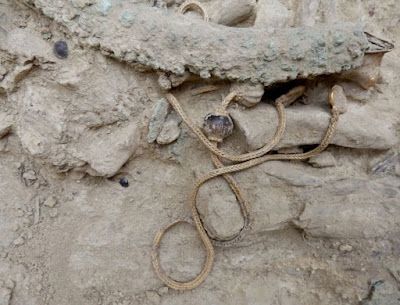 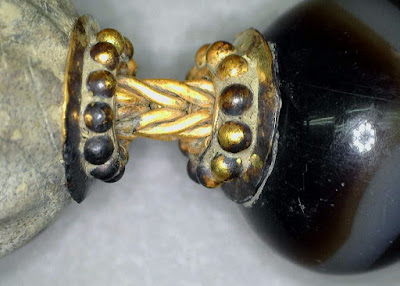 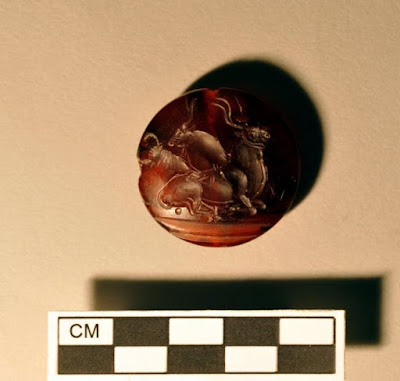 What makes this tomb important as well as amazing is its date. It is generally thought that Mycenaean civilization arose on the Greek mainland in response to a stimulus provided by Minoan civilization on Crete, which is a thousand years older. Here we have what appears to be a member of a budding Mycenaean warrior elite, buried with a fortune in Minoan goods. Including symbols of authority like this stone seal, identical to the ones used by officials at Knossos:


“This is a transformative moment in the Bronze Age,” Dr. Brogan said.

The grave, in Dr. Wright’s view, lies “at the date at the heart of the relationship of the mainland culture to the higher culture of Crete” and will help scholars understand how the state cultures that developed in Crete were adopted into what became the Mycenaean palace culture on the mainland.

Warriors probably competed for status as stratified societies formed on the mainland. This developing warrior society liked to show off its power through high-quality goods, like Cretan seal stones and gold cups — “lots of bling,” as Dr. Wright put it. “Perhaps we can theorize that this site was that of a rising chiefdom,” he said. 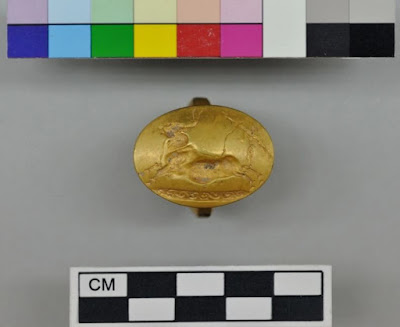 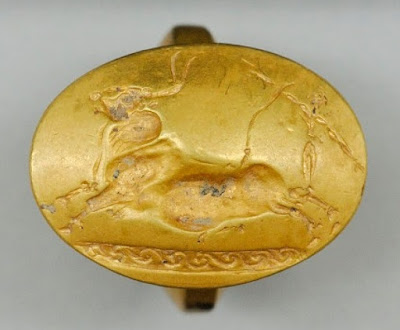 And look at this, another gold signet ring like the ones I wrote about a few weeks ago. Since there seems to be no doubt that this ring came from the tomb, and since it depicts a bull and acrobats, that means there is at least one 100% authentic artifact from the Minoan world depicting bull dancers. Which makes it more likely that the other examples, dismissed as fakes by some, are real.

The story of the tomb's discovery is also fascinating for anyone who enjoys such tales:


The grave was discovered this spring, on May 18, by Jack L. Davis and Sharon R. Stocker, a husband-and-wife team at the University of Cincinnati who have been excavating at Pylos for 25 years.

The top of the warrior’s shaft grave lies at ground level, seemingly so easy to find that it is quite surprising the tomb lay intact for 35 centuries. 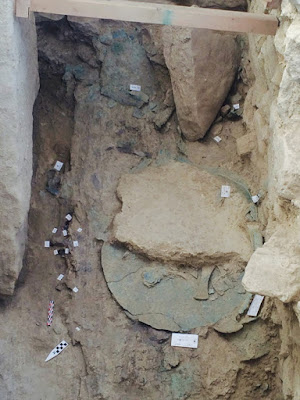 “It is indeed mind boggling that we were first,” Dr. Davis wrote in an email. “I’m still shaking my head in disbelief. So many walked over it so many times, including our own team.”

“I was very pessimistic about this,” Dr. Davis said, thinking that the grave was probably some medieval construction, or that even if it was prehistoric it would almost certainly have been robbed. But a few days later, he received a text message from the supervising archaeologist saying, “I hit bronze.”

What he and Dr. Stocker had stumbled on was a very rare shaft grave, 5 feet deep, 4 feet wide and 8 long. Remarkably, the burial was intact apart from a one-ton stone, probably once the lid of the grave, which had fallen in and crushed the wooden coffin beneath. 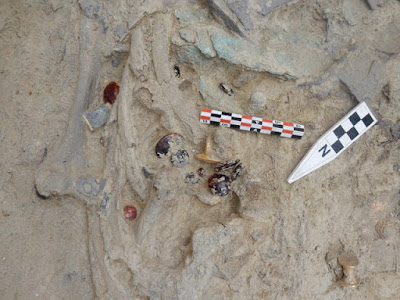 The coffin has long since decayed, but still remaining are the bones of a man about 30 to 35 years old and lying on his back. Placed to his left were weapons, including a long bronze sword with an ivory hilt clad in gold and a gold-hilted dagger. On his right side were four gold rings with fine Minoan carvings and some 50 Minoan seal stones carved with imagery of goddesses and bull jumpers. “I was just stunned by the quality of the carving,” Dr. Wright said, noting that the objects “must have come out of the best workshops of the palaces of Crete.”

An ivory plaque carved with a griffin, a mythical animal that protected goddesses and kings, lay between the warrior’s legs. The grave contained gold, silver and bronze cups.

What an amazing discovery. 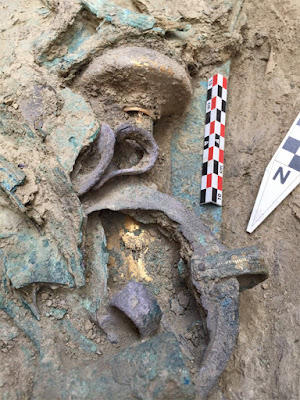