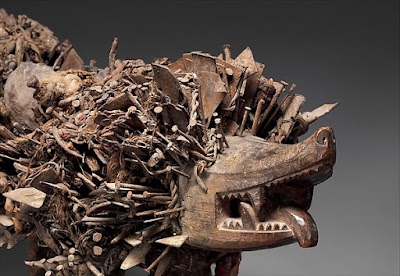 This is a "power figure" from the Kongo culture of central Africa, made in the nineteenth century. It depicts a canine spirit being known as Kozo. Giving it two heads emphasized its powers of perception. The central element is wood, with many iron objects driven in. 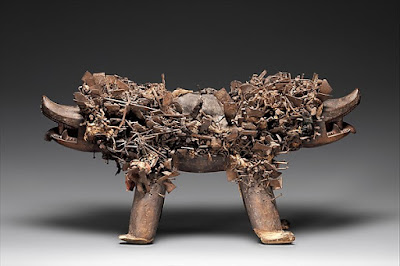 The Met is mounting a big exhibit of objects from Kongo, including a number of "power figures." But I have read through all the exhibit documentation and I still have only a vague idea what a power figure is. They are somehow used in magical operations such as curing and the testing of witnesses; they have compartments where "sacred matter" was sealed, adding to their potency. Sometimes they were used in pairs, for example male and female deities, so as to balance masculine aggression with with feminine creativity. But that's about all I can tell you. I am not sure if the vagueness is intentional, born from a desire to respect African beliefs and not pry into secrets, or if these things are just not well understood.
Posted by John at 8:45 PM