Newspaperman William Randolph Hearst (1863-1951) was for a while insanely rich. He spent his money profligately in every direction, buying property, houses, and art. Like some of the other big Gilded Age collectors, he especially liked buying, not just objects, but whole rooms full of objects and even better whole buildings. I was drawn to this story by the picture above, supposed to show Hearst on the wharf in San Francisco around 1925, inspecting a shipload of medieval stones. 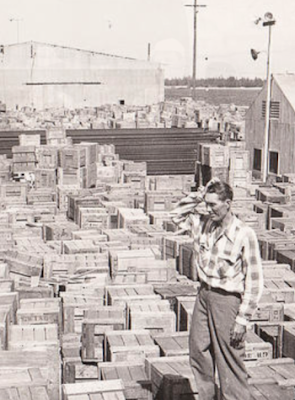 So I started work on what I thought would be a quick little post about Hearst's mad buying spree and the fate of these particular stones. I discovered, though, that Hearst bought so much stuff that it is difficult to say which building might be in these crates. Nor is that even Hearst himself in the picture; most likely it is one of his architects, Walter Steilberg. Also, after 1929 Hearst's fortunes suffered badly, and he started selling off his collections even faster then he had acquired them. His two biggest acquisitions, two whole monasteries, were not re-assembled in his lifetime. 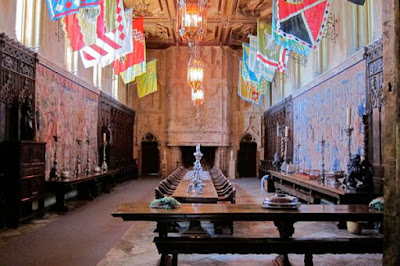 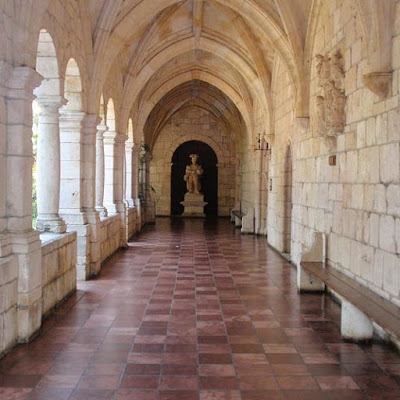 So for Hearst, at least, buying a whole monastery was not much of a stretch. The first one he purchased was St. Bernard de Clairvaux, built between 1133 and 1141 at Sacramenia, near Segovia in northern Spain. Hearst bought the cloisters and several outbuildings in 1925, and the stones were individually numbered and then shipped to America in 11,000 crates. Because of Hearst's mounting financial troubles and a loss of interest in the project, things soon stalled:


The massive crates remained in a warehouse in Brooklyn, New York, for 26 years. One year after Hearst’s' death in 1952, they were purchased by two entrepreneurs for use as a tourist attraction. It took 19 months and the equivalent of nearly $20 million dollars (in today’s currency) to put the Monastery back together. In 1953 Time magazine called it “the biggest jigsaw puzzle in history.”

In 1964, Colonel Robert Pentland, Jr, who was a multimillionaire banker, philanthropist and benefactor of many Episcopal churches, purchased the Cloisters and presented them to the Bishop of Florida. Today the parish Church of St. Bernard de Clairvaux is an active and growing congregation in the Episcopal Diocese of Southeast Florida. Services are held on Sundays and weekdays in both English and Spanish. 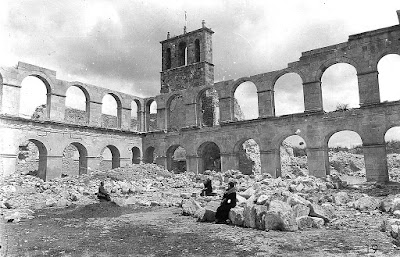 It seems typical of Hearst that having lost interest in his first monastery, which was sitting in a New York warehouse, he then bought another:


Santa María de Óvila is a former Cistercian monastery built in Spain beginning in 1181 on the Tagus River near Trillo, Guadalajara, about 90 miles (140 km) northeast of Madrid. During prosperous times over the next four centuries, construction projects expanded and improved the small monastery. Its fortunes declined significantly in the 18th century, and in 1835 it was confiscated by the Spanish government and sold to private owners who used its buildings to shelter farm animals.

American publisher William Randolph Hearst bought parts of the monastery in 1931 with the intention of using its stones in the construction of a grand and fanciful castle at Wyntoon, California, but after some 10,000 stones were removed and shipped, they were abandoned in San Francisco for decades. These stones are now in various locations around California: the old church portal has been reassembled at the University of San Francisco, and the chapter house is being reassembled by Trappist monks at the Abbey of New Clairvaux in Vina, California. Other stones are serving as simple decorative elements in Golden Gate Park's botanical garden.

The picture above shows what was left of the monastery after Hearst's men had taken away what they wanted. 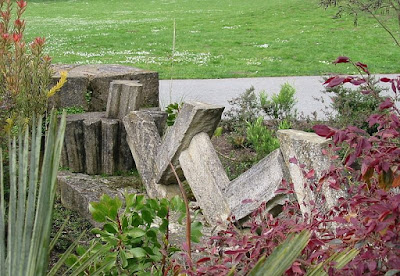 Above, some of the stones in Golden Gate Park. 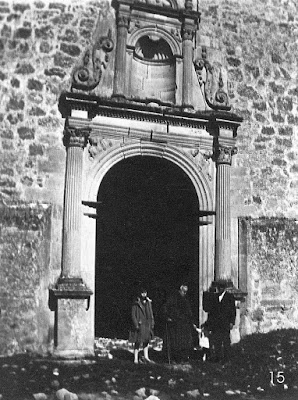 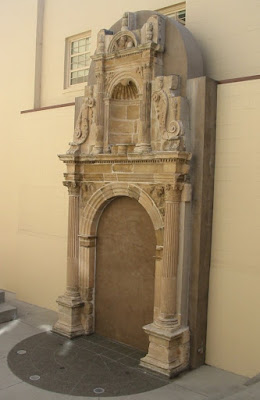 The monastery entrance in Spain and at the University of San Francisco. 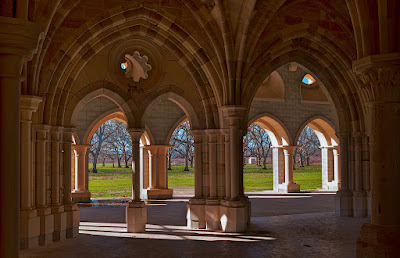 Many of the stones that Hearst purchased came from the monastery chapter house. When he heard about this, the abbot of the Trappist Abbey of New Clairvaux in California thought they should be reassembled to become part of his monastery. He first came up with this plan in 1955, but it actually took until 2003 for this to happen, with funding from the Hearst foundation. Only about half of the stones in the reconstructed chapter house are original, but the rest were carved by stone masons to match the medieval patterns. 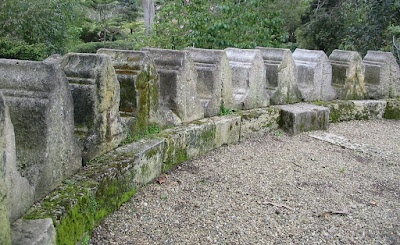 And so my struggle to find out about that one photograph comes to an end, after a circuitous but fascinating journey.
Posted by John at 9:59 AM

Cripes, I thought I already had more than enough reason to hate Hearst with a passion, but this just adds to the pile of reasons.