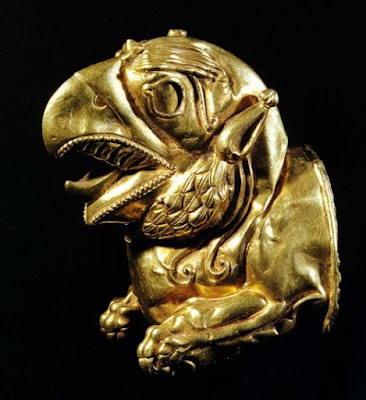 Around 1950, objects started to show up on the antiquities market in Iran that were said to come from a treasure hoard discovered by peasants. The stories said that the treasure was found at a mound near the village of Ziwiye in northwestern Iran. Some stories added the detail that the hoard was in a metal chest found eroding out of the side of the mound. But no outsider ever saw the chest or the exact site of the find. 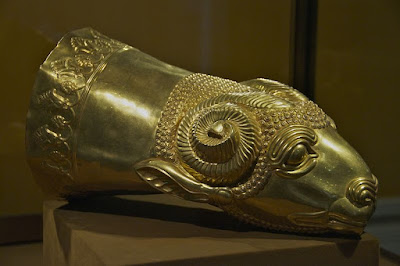 
These gold fragments probably come from Ziwiyeh in north-west Iran. This site is a large mountain top citadel fortified by a massive wall. The citadel is approached by a monumental staircase cut out of the rock which winds around the mountain. The site attracted clandestine excavators and many objects, now scattered in museums around the world, are alleged to have come from here. The looting of the site occurred in about 1946, when local shepherd boys are supposed to have discovered some gold objects. These drew the attention of local villagers and then of antiquities dealers to the site.

(Rhyton in the form of a Ram's head, now in Teheran.) 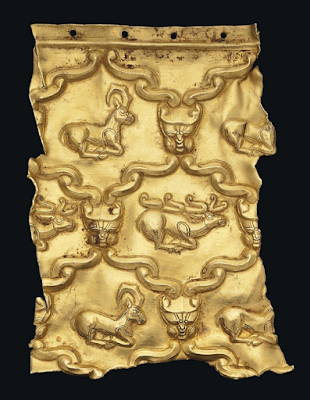 Many of the first objects to show up had been hacked apart, as if a bunch of ignorant peasants had divided them in the simplest available way. This gold plaque in the Scythian style of the 7th century BCE is one of them. 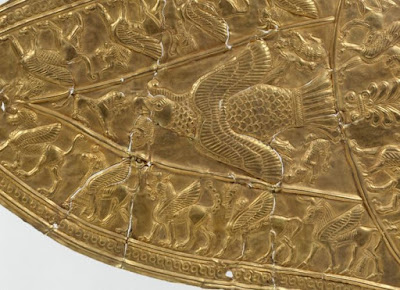 The problem with considering all the objects said to come from Ziwiye as a single hoard is that they are in three distinctly different styles: Scythian, Persian, and Mesopotamian. This gold plaque, now in the Met, is obviously Assyrian or Babylonian. This combination of sources is not impossible. Some archaeologists think this was the treasure of a Median prince -- the Medes were related to the Persians but not identical -- who had diplomatic relations with the Persian heartland, Assyria, and the steppes. But given the lack of context for all of these finds, it is impossible to reach any such conclusion. 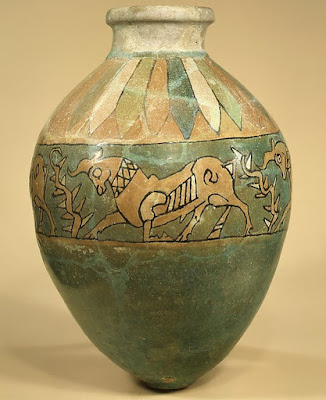 Ceramic vessel in the Met. 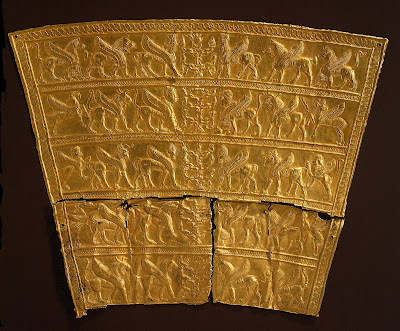 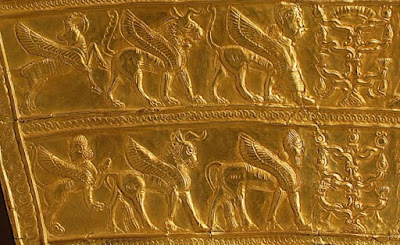 I suspect that there was a treasure hoard from Ziwiyeh -- that seems the simplest way to get the story started -- but that later on all sorts of objects were assigned that mysterious origin to raise their value. Some of them may be fake. 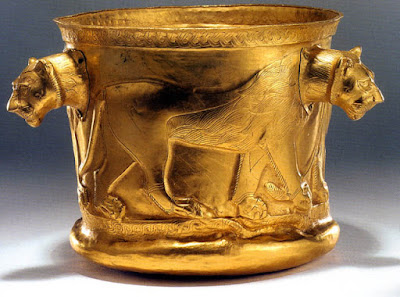 The Met has dozens of alleged Ziwiye objects like this fragment of an ivory panel, perhaps from a chest. Very Assyrian. 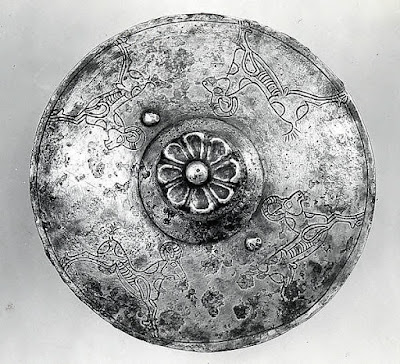 I always love these stories of fabulous artifacts that appear mysteriously on the marketplace, leaving archaeologists to track their origin as best they can. Wherever they came from, this is an amazing array of wonders from a fascinating time and place, as the ancient world of Babylon and Syria lingered on into the era of the classical Persian and Scythian kingdoms.
Posted by John at 9:45 PM

I was able to find a color version of the lion vessel via some image searching on Google. It is indeed gold.