Buried with other People's Heads 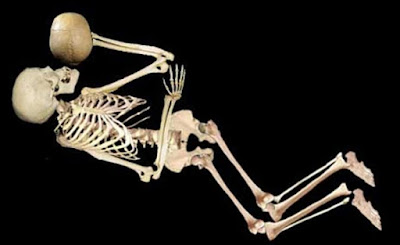 Fascinating archaeological news from California. At a site called Marsh Creek, a cemetery has been found that contains at least 480 burials dating to between 4,300 and 2,950 years ago. Fifteen of those burials were weird: seven were missing their heads, and eight were buried with extra skulls. The extra skulls showed no evidence of trauma, so it doesn't look like they were taken in battle.

Two of the burials contained, not complete extra skulls, but polished skull caps:


Burial 107 is an adult male aged between 35 and 45 at the time of his death. He was buried in with his head pointing south in a pit with two other males, and aside from a partially healed jawbone fracture, there was no evidence of physical trauma on the skeleton. In his grave the researchers found a skull cap - or calotte - covered in red ochre, placed next to his right arm. The calotte was taken from an adolescent or young adult, had been cut near part of the skull known as the superciliary arches, or brow bone, and it had 'highly polished edges.' The archaeologists also discovered a pointed bone fragment and a serpentine phallic charmstone fragment in this grave.

As to who these skulls belonged to, nobody seems to know. Elemental analysis of the bones suggests that all the skeletons and skulls came from the same general area, so the simplest explanation would be that they are all from the same community. Making skull caps out of your relatives would be a little unusual, but the Toltecs and Aztecs did much stranger things with their own relations.
Posted by John at 10:58 AM