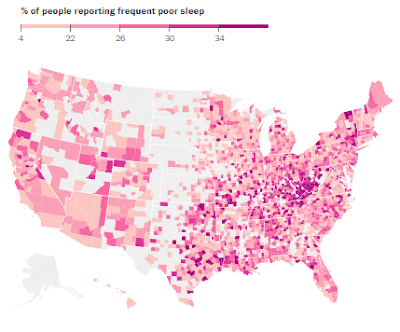 Christopher Ingraham on a new map that shows where Americans suffer from insomnia:


You might assume that hectic, fast-paced lifestyles would lead to high rates of poor sleep in the nation's urban areas. But surprisingly, that's not necessarily what the data shows. Instead, the nation's biggest cluster of bad sleep ended up in the heart of Appalachia and in a cluster of counties in Ohio, West Virginia, Kentucky, Virginia and Tennessee.

Looks to me like a map of worried white people.
Posted by John at 12:14 PM