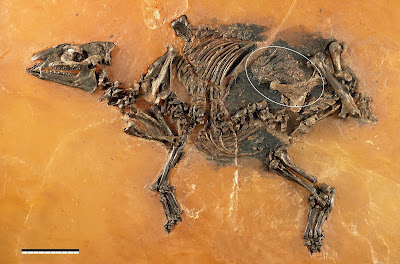 The latest amazing fossil to emerge from Germany's Messel Pit, near Frankfurt, is this horselike mammal that fell into an ancient lake while pregnant. Conditions in the Messel shale sometimes led to the preservation of soft tissue, and paleontologists excitedly probed this specimen to look for evidence of a placenta:


“The question was, is it possible that the placenta was preserved?” said Jens Lorenz Franzen, a retired paleontologist affiliated with the Senckenberg Museum in Frankfurt and one of the study’s authors.

In looking at the fossilized soft tissue, he and his colleagues discovered a preserved placenta, uterus and one broad uterine ligament — evidence, Dr. Franzen said, that the ancient mare had a reproductive system very similar to that of a modern horse.

Incidentally the fossils of Messel date to around the time of the Eocene Thermal Maximum, the hottest period in the past 600 million years, when Germany was a and of sub-tropical forests and swamps rather like south Florida.
Posted by John at 7:13 AM